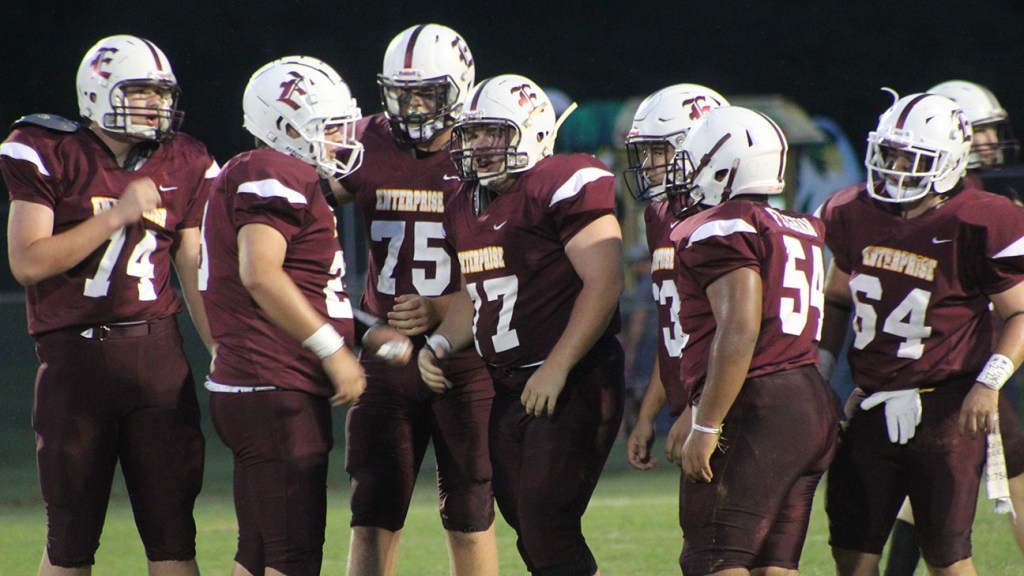 PHOTO BY CLIOFF FURR Enterprise huddles on defense Friday in the first quarter against visiting Ethel High. The Tigers from Attalla County are coached by Loyd Star alum Adam Smith.

The final Ethel touchdown of the first half made the score 32-6 at halftime and came with just one second left on the clock.

The leadup to the touchdown was a good example of how the night went for the Yellow Jackets in the opening 24 minutes of action.

The Tigers got down to the EAC 7-yard line with nine seconds remaining and the clock running as Ethel scrambled to get a play in.

The clock stopped though, on a whistle and a flying yellow flag, as an offside against Enterprise moved the ball down to the doorstep of the goal line.

Ethel pounded the ball in as their double wing offense and deep pool of ball carriers gave the Jacket defense problems all night.

The first play of the game saw Enterprise freshman quarterback Landon McNickles running for an apparent first down as he scrambled away from Tiger defenders, but not before a hit in the back jarred the ball loose and led to an Ethel recovery.

Cyrus Rone scored on a 3-yard run for Ethel after the turnover and after a 2-point conversion, the Tigers led 8-0 with 6:30 remaining in the first quarter.

Coach Trey Woodard’s Yellow Jackets were making their season debut after being off last week. EAC played Hillcrest Christian in the season opener for 2021 but couldn’t return the game against the Cougars after the MAIS member school dropped to 8-man football due to low participation numbers this season.

The Jackets moved the ball well on the drive after Ethel’s first score.

McNickles picked up 46-yards on a big run that got him down to the Ethel 12-yard line. His gain was set up by a great block on the edge from wide receiver Daylan Barden.

The drive was then capped by a 3-yard touchdown run from sophomore running back Ayden Arevalo. Ethel held on the 2-point try and led 8-6 with 3:25 left in the first quarter.

Both teams tried for an onside kick, so most drives started with great field position after those unsuccessful attempts.

Ethel didn’t need much time to build their lead as touchdown number two came less than 30 seconds into the second quarter.

It felt like the first team that dropped a possession by not scoring in the early going would find themselves losing momentum as both teams played lots of players both ways, especially along the lines.

When Enterprise turned it over on downs on their third possession of the first half, Ethel hit like lightning with a 55-yard touchdown run.

Things went from bad to worse when Enterprise was attempting its first punt of the night as they trailed 20-6 in the second quarter.

The snap sailed over the punters head and Ethel recovered deep in its own territory.

Another Ethel rushing score made it 26-6 with 3:29 left in the first half.

Smith’s Ethel team lost 35-0 last week to a strong 3A Clarkdale program. He took over an Ethel program that was 0-12 in the season before his hiring.

Hirst first team went 2-5 in the COVID-19 affected 2020 season. Ethel and Enterprise were supposed to tangle last season but COVID-19 issues for the Tigers cancelled that game.

Ethel finished 7-5, with two losses coming via forfeit, and lost to eventual 1A state champs Bay Springs in the first round of the playoffs.

Up next for the Tigers is a home game on Frida against McAdams.

Next up for Woodard’s team is a 7-mile trip down Bogue Chitto Road to take on their county rivals, the Bogue Chitto Bobcats on Friday.

Coach Gareth Sartin and the Bogue Chitto Bobcats moved to 2-0 on the season with a 43-14 win over Salem on Friday night.

It was a second straight road win for BC after they opened the season with a 17-7 victory over Pisgah last week.

The Loyd Star Hornets (1-1) bounced back from a close loss last week at Mize to get a blowout win over visiting McLaurin on Friday.

It’s been a rough going for McLaurin in the early going as the Tigers (0-2) were beaten 62-0 by Puckett in their opener last week.

Loyd Star is back on W. E. “Sambo” Smith Field on Friday when they’ll host the Salem Wildcats.

Brookhaven Academy is 1-0 in MAIS District 4-4A after winning 28-7 over the visiting Bowling Green School Buccaneers on R.M. “Red” Stuart Field.

Brookhaven Academy led 13-7 after the first quarter before putting some distance between the teams in the fourth quarter.

Coach Anthony Hart’s Cougars (2-1) will be favored again next week when they play St. Aloysius (0-3) at home.

A fourth quarter touchdown was the difference in Meadville for Franklin County (2-0) in a 19-13 win for the Bulldogs over Wesson (1-1) Friday night.

A 10-yard touchdown pass from Will Loy to Justin Hailey put Wesson up 6-0 in the first quarter and an 18-yard scoring pass from Loy to Deshawn Smith made the lead 13-6 in the second quarter.

Franklin County and coach BJ Smithhart travel to play at 4A North Pike on Friday. Wesson is back at home this week when they’ll host Wilkinson County (0-2).

The 1A Lumberton Panthers (0-2) didn’t pose much of a problem on Friday for the 4A Lawrence County Cougars (2-0) in Monticello.

A week after beating Brookhaven High in their opener, LC and coach Jesse Anderson went up big early and never looked back.

LC is on the road next week when they travel to meet Natchez High (2-0) in Adams County.

The 6A Petal Panthers (2-0) visited King Field on Friday and led early in earning a 35-8 win over Brookhaven High School (0-2).

A 48-yard touchdown run by junior Xaver Gayten was the lone score of the night for coach Tucker Peavey’s crew.

“I thought we played hard, but we didn’t play smart, especially in the first half,” said Peavey. “Our defense, especially our front seven played really well all night.”

BHS has an open date next week and returns to the field on Sept. 16 at McComb. Next up for Petal is a home date against Columbia High.

Sacred Heart, who plays as an MHSAA independent member in football, faces a mixture of public and private schools during its season.

West Lincoln and coach Brad Bland will play on the road next week at Puckett High.