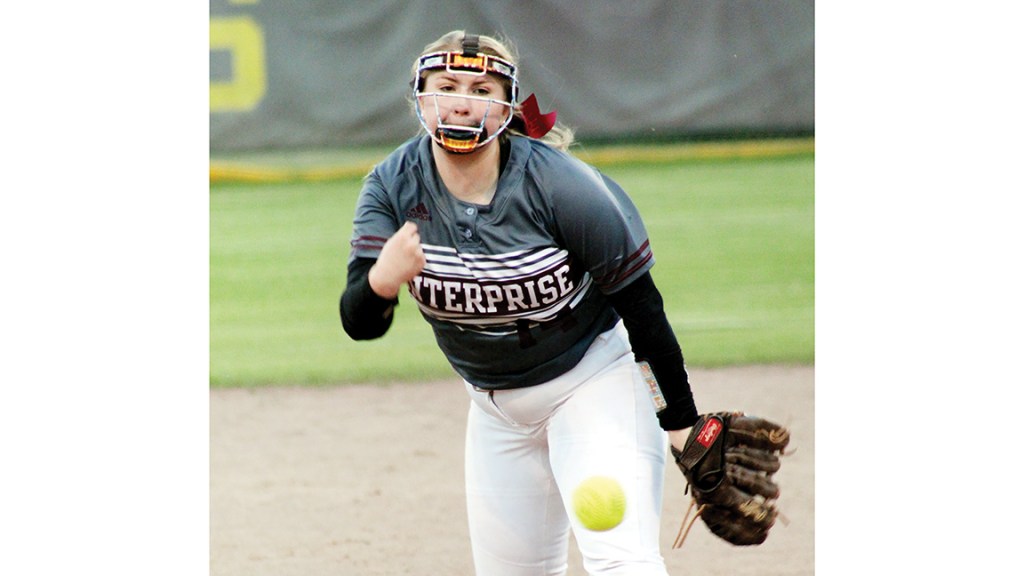 Photo by Katie Furr Enterprise freshman pitcher Natalie Harris and the Lady Jackets had their Thursday game against West Lincoln moved to Friday due to rain. Enterprise plays in the first two games of the Loyd Star Invitational Saturday at 9 a.m. against Brookhaven High and 10:30 a.m. against Franklin County.

The wet weather Thursday washed away all the area softball and baseball games that were scheduled. With Region 7-2A softball in their final round of division games, the postponed games must be made up.

Bogue Chitto and Loyd Star will play Monday at 6:45 p.m. in a rescheduled game at Loyd Star. Bogue Chitto will also play Brookhaven High at home on Tuesday at 6:15 p.m.

Loyd Star is hosting their Invitational Tournament Saturday. They’ll play Franklin County at 1:30 p.m. and Raleigh at 7:30 p.m. A previously scheduled game for Tuesday against Mendenhall has been canceled.

Enterprise and West Lincoln bumped their rained-out game from Thursday back to Friday. Saturday Enterprise will play twice at Loyd Star with a 9 a.m. game against Brookhaven High and a 10:30 a.m. matchup with Franklin County.

Brookhaven High also plays Puckett at 12 p.m. at the Loyd Star Tournament. Wesson was scheduled to play Port Gibson in a divisional game on Thursday. The makeup date has been set for April 11 at 5 p.m. Saturday at Loyd Star the Lady Cobras play Puckett at 3 p.m. and Lawrence County at 6 p.m.

Lawrence County had a game at Sumrall called off on Thursday. The Lady Cougars will also play Raleigh at 4:30 p.m. at Loyd Star Saturday.