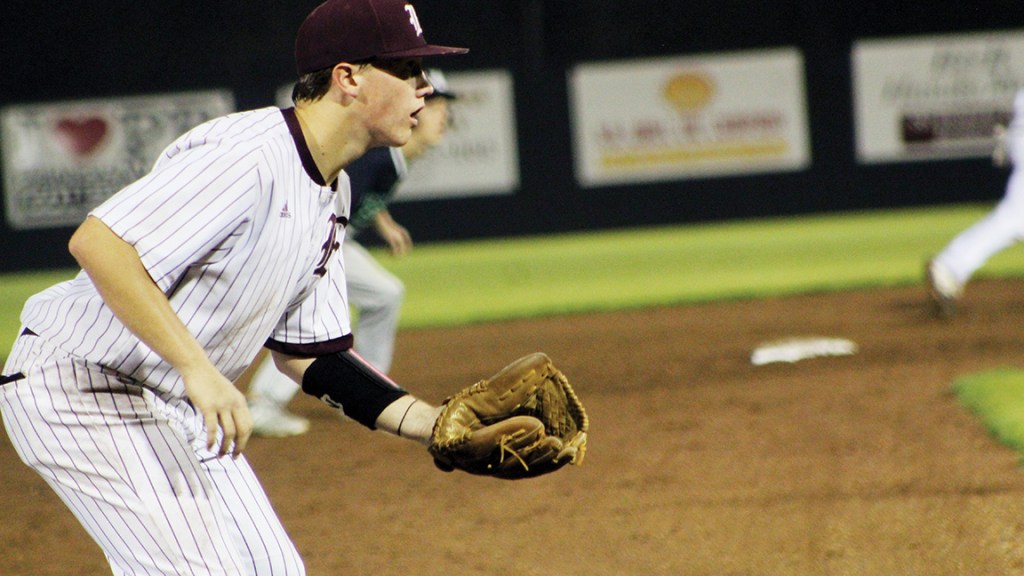 Photo by Cliff Furr Enterprise freshman third baseman Trenton Tarver stands on the hot corner Friday against West Lincoln. Tarver finished 2-of-3 with a double in a 13-0 Yellow Jacket win. Enterprise closes out their season with a trio of road games beginning Saturday at Vicksburg.

The Enterprise Yellow Jackets (10-5-1) concluded the Region 7-2A portion of their schedule Friday night with a 13-0 win over West Lincoln (4-7) at home.

The Bears were handcuffed at the dish by junior Jacket pitcher Austin Fulger. The left-handed Fugler gave up one hit and struck out nine in four innings to get the complete game shutout. A week after facing Loyd Star while feeling under the weather, Fugler was back to throwing his best stuff on Friday.

“Great to see Austin feeling like himself again,” said Enterprise coach Cass Brister. “His breaking ball was really working for him, fastball had zip on it, and he was really filling it up.”

Tuesday, senior Landon Gartman held the Bears to a pair of hits in a 10-1 victory. West Lincoln coach David Gilbert knows his group isn’t the only one that has had trouble manufacturing runs this year against a potent EAC 1-2 punch.

“They’ve got a great staff,” said Gilbert. “Fugler was very good tonight and they’ve got some other arms in John Burns and Colby Beard that can give them quality innings. We’re a young team and an inexperienced team facing some good pitching.”

Brister put the power in his lineup, senior Hunter Richardson, in the leadoff spot. It’s a strategy he’s used from time to time this season as no one wants to walk the leadoff man and it allows Richardson to see better pitches than he may get later in the order.

Richardson — a Jones College signee — made his coach look good when he blasted the third pitch he saw over the left field fence to put Enterprise up 1-0. A John Burns RBI single later in the inning would put the Jackets up 2-0 after one.

The home team would start to pour it on in the second as they stretched the lead to 7-0. A Trenton Tarver double in the frame scored Lawson Chemin and moved Beard to third where he would score later in the inning on an error.

Richardson homered again in the third as his two-run bomb to left scored Dustin Prather. Gartman had an RBI single later in the inning and Burns scored two runs with a double that put Enterprise up 12-0. The final run of the night came later in the third when a Prather single scored Tarver.

Gavin Burris produced the lone WL hit of the game with a single. Burris and Garrett Maxwell are the only seniors on the West Lincoln team. Freshman Brady Ratcliff took the loss on the mound for the Bears.

“Brady is going to be a good high school pitcher,” said Gilbert. “We’ve had to ask a lot of young guys to step up for us all season against more experienced competition.”

Last season the Bears were eliminated in the opening round of the playoffs by eventual state champs St. Joseph. The year before, Gilbert had a 20-7 team that finished second in the division before being knocked out of the postseason by Clarkdale. Longtime Lawrence County assistant Craig “Bowie” Davis is in his first season assisting Gilbert.

The Bears will play in the postseason again this season as they currently sit in fourth place with a 3-3 record after sweeping Amite County and splitting with Bogue Chitto. For the Bears to jump back into third they’ll need to win a game this week against Loyd Star. Loyd Star must sweep WL to secure the region title.

West Lincoln plays at Loyd Star tonight at 6:30 p.m. before hosting the Hornets on Friday.

“I think Enterprise has a shot to make a run in the playoffs with the type of starting pitching they have,” said Gilbert. “They throw breaking balls for strikes and have velocity that you don’t see often during the season.”

EAC dropped a 12-8 loss to North Pike Saturday. The Jackets are off this week before traveling to Vicksburg on Saturday for a 1 p.m. matchup with the Gators. Next week they’ll play at McComb Monday and South Jones Tuesday.

When the 2A state playoffs begin on April 18 — if Enterprise does indeed finish second in the region — it would appear that the Richton Rebels are the most likely first round opponent for the Jackets. Region 7-2A matches up with Region 8-2A and that division currently has St. Patrick and Perry Central tied for first, Richton locked in to third place and Collins playing North Forrest for fourth place this week.