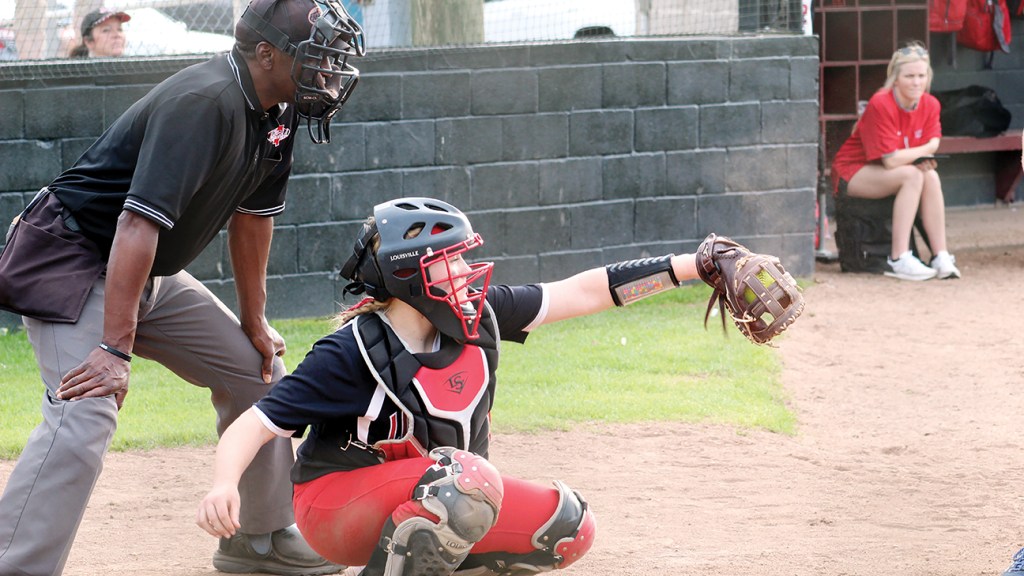 Photo by Katie Furr Loyd Star eighth grade catcher Alyssa Leggett and the Lady Hornets get an opening round bye in the 2A state tournament after winning Region 7-2A. The Lady Hornets are scheduled to host Puckett tonight, weather permitting.

Below is a roundup of area high school softball results from Monday night.

A pair of region champions matched up Tuesday and it was the Lawrence County Lady Cougars who edged out the homestanding Loyd Star Lady Hornets 2-1 in the regular season finale for LC.

LC got their first batter of the game on when Abbey Turnage bunted for a single. Turnage would gain third after a Sydney Peavey groundout. That set up a Skyler Speights RBI single that scored Turnage and quickly put LC up 1-0. Lawrence County added to their lead in the top of the fifth when Pevey hit a solo home run to put them up 2-0.

Loyd Star manufactured a run in the sixth, but the Lady Cougar defense kept them from getting more. Malori Cade started the inning off with a double and then moved to second on an error that also put Meagan Poole on first.

A Johnna Norman double scored Cade, but Poole was thrown out at the plate. LC pitcher Ashley Holden would then get a pop out and a strike out to end the inning with Norman stuck on second base.

Holden gave up five hits and one earned run while striking out two and walking one over seven innings. The junior tossed 83 pitches in the win. Eighth grade left-hander Carson Hughey struck out five for Loyd Star and walked none on 93 pitches.

Loyd Star concludes their regular season tonight with a 6:30 p.m. matchup with Puckett, weather permitting. There is a better than good chance Loyd Star and Puckett will meet again next week in the playoffs as Loyd Star awaits the winner of the Puckett versus St. Patrick series.

The Magee Lady Trojans swept a double header from Enterprise Tuesday by winning game one 15-3 and game two 10-0 over the Lady Jackets.

In game one EAC got a pair of hits each from Mallory Honea and Ainslee Jergins. Belle Porter, Anna Jergins, Ashlyn Bland and Lizzie Boyte all also hit safely for the Lady Jackets. Adelia Nations and Boyte had an RBI apiece.

The Lady Panthers ended regular season play Tuesday at North Pike. The Lady Jags held BHS to only a pair of hits in a 12-2 North Pike victory.

Coach Mandy Vinson saw her team go up 2-0 after one inning, but North Pike and their bats would come alive to score two in the second, three in the third, three in the fourth and four in the fifth to end the game.

Kat Wallace and Lynsey Nations both hit safely for BHS with Nations getting an RBI, as well.

BHS will now await the winner of the West Jones and Picayune opening series as the Lady Panthers earned a bye by winning their region.