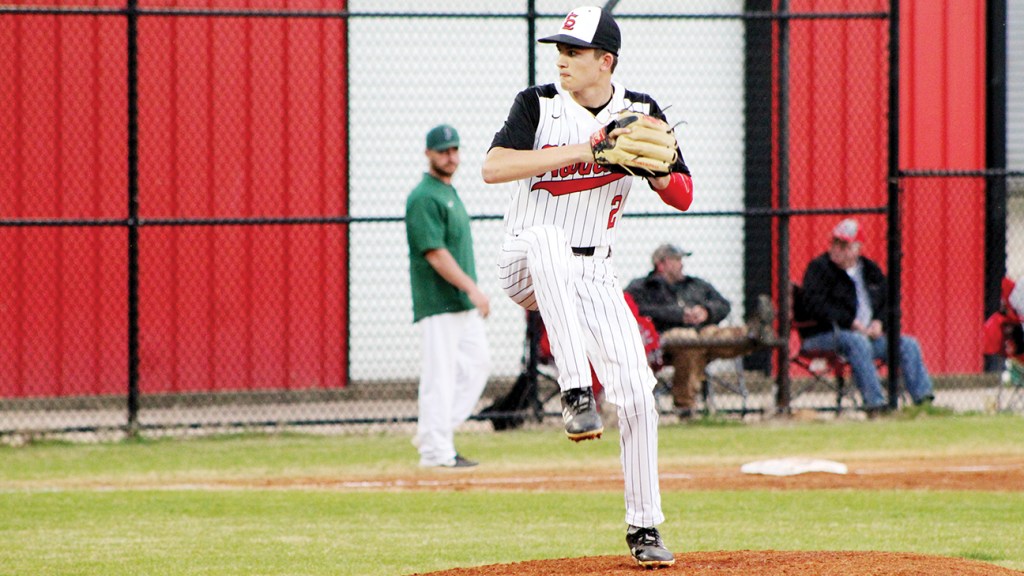 Photo by Cliff Furr Loyd Star junior southpaw Reese DeHart and his team take on Collins in the opening round of the MHSAA 2A state playoffs this weekend. The Hornets will hosts Collins Friday at 6 p.m. Saturday Collins will host game two that starts at 11 a.m. If game three is needed it will be played at Loyd Star Monday.

Here is a roundup of area high school baseball action from Tuesday night.

The Hornets (13-8) roared back from a first inning 3-0 hole to score nine unanswered runs in a 9-3 win over Franklin County Tuesday.

The Hornets got on the board in the top of the third when James Beard singled and then scored from first on a Dane Smith single. Smith would score later in the inning on a Rials Hester single that cut the FC lead to 3-2.

Hester picked up the win after going 3.2 innings and giving up no hits and striking out two on 49 pitches. Reese DeHart drew the start and struck out two, walked three and gave up three unearned runs on 67 pitches.

The first-round playoff opponent for the Hornets will be the Collins Tigers. Loyd Star hosts the Tigers on Friday at 6 p.m. and then travels to Collins Saturday at 11 a.m.

Enterprise (11-6-1) jumped up 4-0 on a good 5A South Jones team Tuesday night before the Braves used a seven-run sixth inning to give themselves a 9-4 win over the Yellow Jackets.

South Jones (20-5) is a potential second round opponent of Brookhaven High in the 5A playoffs. The Braves only losses this season were to Pearl River Central, West Lauderdale (21-3) and West Jones (21-5).

Enterprise got on the board in the third when Beard hit a double that scored Austin Fugler. The Jackets would then add to the lead with runs on a passed ball and two errors.

“We played really well for the most part,” said Jackets head coach Cass Brister. “Had a couple mental errors we need to get cleaned up. From here on out we’ve got to play our best baseball.”

Enterprise begins the post season Friday when they host Richton for a 7 p.m. first pitch. Saturday the Jackets will travel to Perry County for game two and, if necessary, game three will take place at Enterprise Monday.

The Cougars (13-9) wrapped up their regular season by keeping their district record unblemished Tuesday with a walk-off 2-1 win over Sylva-Bay Academy in extra innings.

With the game tied 1-1 in the bottom of the eighth, senior Dawson Flowers got the frame started with a single as the leadoff batter. Flowers would later advance to third on a Caston Thompson single. Thompson moved to second when Nick Ogden drew a walk and then the next BA batter, Tanner Watts, drew a walk that scored Flowers and ended the game.

Watts hit a ball in the fourth inning that was fielded for an error by Sylva-Bay and scored the first BA run.

Flowers finished with two hits, as did Thompson. Cade Brown and Collin Waldrop also hit safely for BA. Thompson pitched the first seven innings for BA and struck out nine while walking four and giving up one unearned run on 104 pitches. Judson Griffin was spectacular in relief as he struck out four in the eighth on 21 pitches to pick up the win.

The Cougars next play Tuesday for an opening round playoff game at River Oaks Academy in Monroe, Louisiana. BA will host River Oaks Thursday for game two. If necessary, game three will follow immediately after game two.

5A North Pike beat the Cobras (14-9) Tuesday with a walk-off hit in the bottom of the 12th. The Cobras now turn to the playoffs where they’ll play Franklin County. Game one is at Wesson Saturday at 7 p.m.

Game two will be Monday in Meadville at 4:30 p.m. If a game three is needed it will be played following game two.