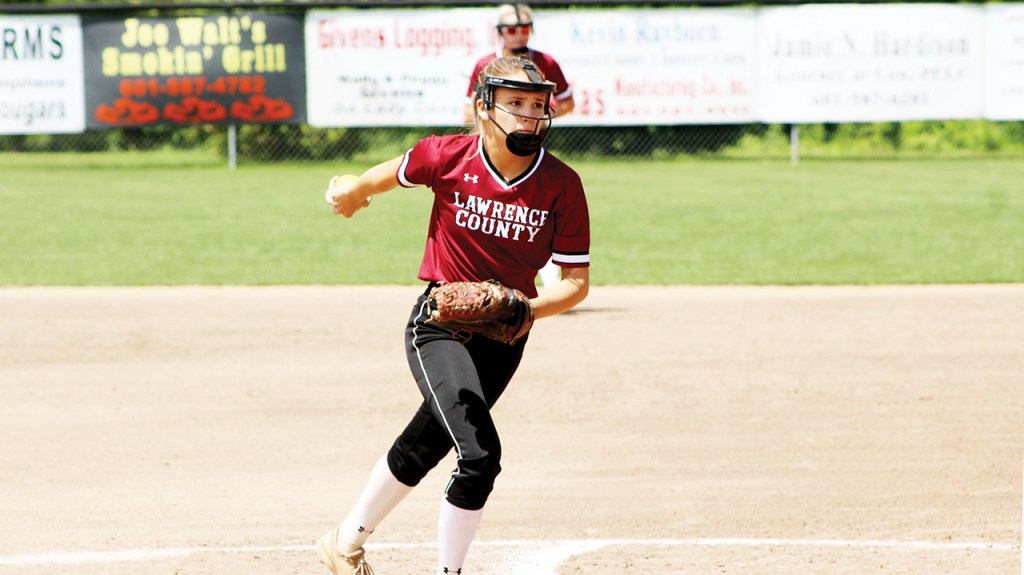 Photo by Cliff Furr Lawrence County junior pitcher Ashley Holden delivers to the plate against Northeast Jones Monday. The NEJ Lady Tigers gained a measure of revenge by eliminating LC after the Lady Cougars put them out of the playoffs last season.

Here’s a look at how area high school softball teams have played in the playoffs.

The defending 4A south state champion Lawrence County Lady Cougars (16-8) were swept by Northeast Jones in their opening round matchup. Saturday the Lady Tigers used 15 hits to run away with a 12-2 win in Jones County. Monday NEJ pitcher Amya Stevens struck out nine and held LC scoreless in a 4-0 Lady Tiger win. Northeast Jones got two runs in the fourth and two in the fifth and kept the Lady Cougars out of scoring position most of the game.

Saturday the Lady Cougars got a pair of hits from Sydney Pevey and Anne-Claire Sistrunk. Alyssa Lambert got three hits for LC and Lily Stephens also hit safely for the Lady Cougars. Skyler Speights and Stephens had an RBI apiece. Pevey, Stephens and Lambert all hit a double apiece.

BC whips Clarkdale in opening round series, beats Richton

The Bogue Chitto Lady Bobcats only needed two games to take care of the Clarkdale Lady Bulldogs in their opening round series. Friday BC went to Lauderdale County and smacked Clarkdale 19-0. Codi Leggett pitched the win in the circle and smashed a home run at the plate. Alece Nettles hit a triple for coach Kris Smith. Kylie Chapman, Julianna Frazier and Baileigh Jackson each hit a double apiece.

Saturday the Lady Bobcats finished Clarkdale off with an 8-2 home win. Jackson and Leggett each hit a double Saturday as Frazier picked up the win in the circle.

BC began the second round Monday against Richton and whipped the Lady Rebels 10-0 at Bogue Chitto. The Lady Bobcat will travel to Richton for game two beginning at 6 p.m. tonight. If game three is needed it will be played immediately afterwards.

Coach Andrew Redd and his Lady Bears (11-7) lost a pair of close games to Taylorsville in their weekend series. Friday the Lady Tartars got a walk-off win 1-0 over WL. Averi Paden had been holding the THS bats in check before Taylorsville began the seventh off with three consecutive base hits. An error would then allow the Lady Tartars to score the game winning run.

Saturday Taylorsville outhit WL 8-3 as they took a 6-0 win to move on to the next round. Bailee Goodson, Madison McNatt and Deanna Lofton hit safely for the Lady Bears in the loss.