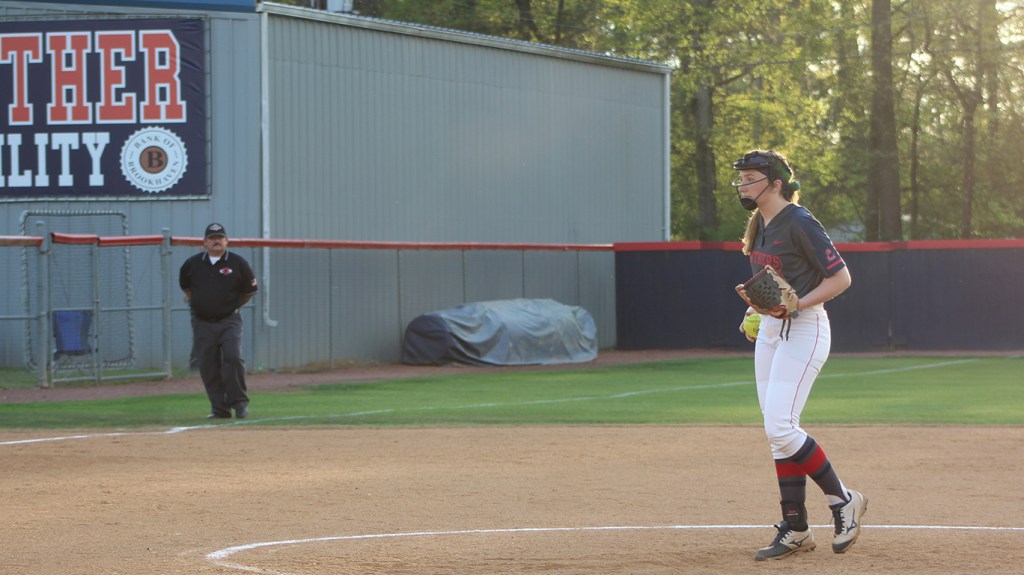 Photo by Cliff Furr Brookhaven High junior Lynsey Nations was the winning pitcher in the circle for the Lady Panthers Monday as they beat West Jones in game one of their MHSAA 5A state playoffs second round matchup.

The homestanding Lady Mustangs scored three runs in their first at bat, but BHS would respond with five in the top of the second as BHS never trailed again.

To begin the second, batter Layla Woodall reached on a single for BHS. Woodall would score later in the inning on a Kaysha Register single. A Madi Miller bunt was misplayed for an error by WJ which led to BHS plating two more runs to tie the game at 3-3. Kat Wallace then bunted to score a pair of runs to put the Lady Panthers up 5-3.

In the fourth the Lady Panthers got another run off of a Meg Foster single that scored Miller. Later in the inning BHS went up 7-4 after a Woodall single scored Wallace.

The Lady Mustangs cut the lead to 7-6 after five innings, but the Lady Panthers extended their lead back out when Angel Wilkinson singled to score Foster and Kyla Henderson.

WJ would again pull within a run in the bottom of the sixth when they cut the score to 9-8. West Jones put a new pitcher in the circle to start the seventh and Register drew a leadoff walk. Miller and Wallace would then strike out, but Foster, Lynsey Nations and Woodall drew consecutive walks to score a run. Henderson singled to score Foster and Nations and put BHS ahead 12-8.

The home team got a two-out double in the bottom of the seventh to pull within 12-9, but the BHS pitcher Nations forced a ground out to end the game.

Nations tossed 153 pitches to pick up the win. She scattered seven hits and struck out two while walking nine. She gave up six earned runs.

“Lynsey didn’t get some calls that I think she should have behind the plate, but she never let it bother her,” said Lady Panther head coach Mandy Vinson. “She kept working and we were able to play defense well behind her.”

Woodall and Foster had three hits apiece for BHS.

“The bottom of our lineup came through and we were able to scratch enough runs each inning to stay ahead after getting down three in the first,” said Vinson. “We executed what we wanted to do really well. Our girls played with grit and we’ve been talking about being gritty all season long. It’s a new season for us and we want to finish well.”