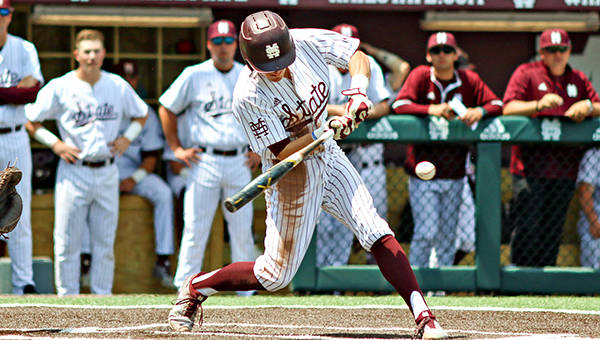 At this point, it’s not a matter of if Jake Mangum will break the Southeastern Conference’s career hits record, but when.

It probably won’t be Friday night. It could be Saturday or Sunday, or next week. The one thing that’s certain is that soon Mangum will be all alone in the record books and he can finally get on with helping Mississippi State chase the SEC and national championships.

Mangum has 348 hits in 3 1/2 seasons with Mississippi State, and needs five more to pass LSU’s Eddy Furniss for first place on the SEC’s all-time list. Furniss set the record between 1995 and 1998.

“I just want to win. I couldn’t care less about it, to be honest with you,” Mangum said during a press conference earlier this week, when asked about the record. “It’s always in your mind a little bit. With how social media works nowadays it’s tough not to think about. But I promise you, I would’ve rather gone 0-for-the weekend and swept Arkansas than gotten 10 hits and got swept.”

Mangum passed Jeffrey Rea for Mississippi State’s school record on April 5 against Tennessee, with his 336th career hit, and has been closing in on Furniss since then.

The Bulldogs’ leadoff hitter has averaged 1.47 hits per game in his career, but the most impressive stat to his credit might be when he gets his hits.

Mangum has hit in the leadoff spot in 193 games in his career and reached base 41.2 percent of the time. He has 63 hits and 13 walks, and has been hit by a pitch in four of those 193 plate appearances.

Mississippi State has 14 regular-season games remaining and at least a few more in the SEC and NCAA tournaments. Mangum probably won’t catch Stephenson and Greene, but if he maintains his career average could finish in the top five.

Mangum, though, made it clear that he’s not worried about any of that.

“The hits will come if they come. If I swing at strikes and not chase bad pitching, the hits will come,” he said. “Hits aren’t controllable, but how good your at-bats are you can control.”

A more pressing concern, he stressed, was doing his part to pull the Bulldogs out of a small slump as they head into a difficult closing stretch of the regular season.

Mississippi State (33-9, 10-8 SEC) was swept by Arkansas last weekend to slip from first to fourth place in the SEC West. The next three weekends of the conference schedule include series with No. 5 Georgia, No. 10 Texas A&M and No. 19 Ole Miss.

Mangum added that the Bulldogs did not need to panic in the wake of last week’s sweep against Arkansas and a surprisingly difficult 5-1 win over Texas Southern the week before that.

The Bulldogs rebounded to beat Ole Miss 8-1 in the Governor’s Cup game on Tuesday — Mangum went 1-for-3 with a single, RBI and a run scored — which almost certainly gave them a boost heading into the series with Georgia.

“We’ve been in much worse situations in my four years here, there’s no doubt about that,” Mangum said. “Talent can only take you so far. It’s how well you play together. (Against Arkansas) we just didn’t play well, and we didn’t play well the last midweek either. So it was just a bad week. We had four games we weren’t really right at the plate and pitching didn’t do what they do normally. We’re fine. There’s no need to panic.”

• All games broadcast on the radio on 105.5 FM and streamed online on SEC Network Plus