Thomas has long made us proud 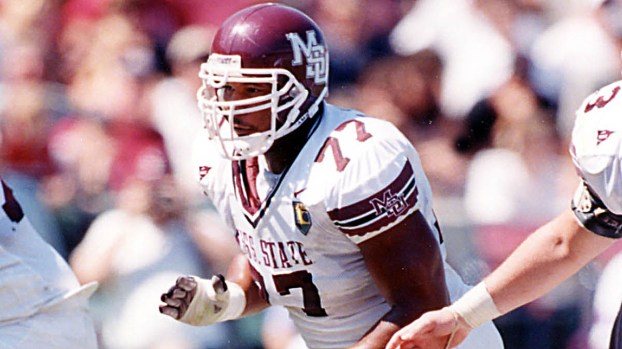 Photo by Hail State Former NFL All-Pro Randy Thomas played for Mississippi State and Copiah-Lincoln Community College before being a second round draft pick of the New York Jets. Thomas was inducted into the Mississippi Community College Hall of Fame Tuesday night at the Muse Center in Rankin County. 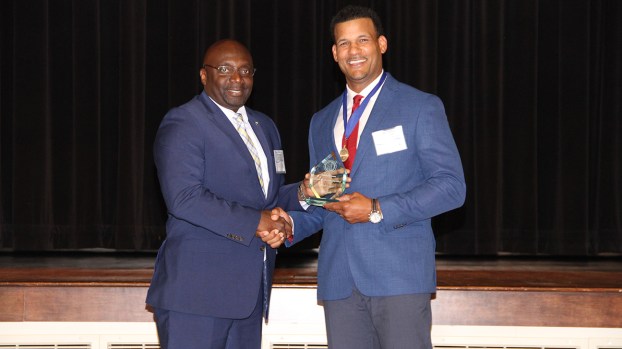 Photo Co-Lin Sports Information Former NFL All-Pro Randy Thomas played for Mississippi State and Copiah-Lincoln Community College before being a second round draft pick of the New York Jets. Pictured are, from left: Dewayne Middleton, vice-president of the Copiah-Lincoln Simpson County Center, and Thomas at the Mississippi Community College Hall of Fame ceremony Tuesday night at the Muse Center in Rankin County.

When I was in junior high I convinced my parents to buy me a subscription to Sports Illustrated. I thought I would get one of those phones that was shaped like a football, the ones they said new subscribers received along with a t-shirt and an NFL bloopers VHS. The football phone never came, but every two weeks a new issue arrived in the mailbox.

I didn’t just read the magazine, I inhaled it. From “Faces in the Crowd” in the front to the Rick Reilly column on the back page, I read every article in-between. There was a page in the back that was devoted to college football during that season. It was filled with news, notes and tidbits of information.

I’ll never forget reading that section as a teenager on Nola Road and seeing the name of my hometown in the magazine. The short five paragraph blurb was about the play and eating habits of Mississippi State All-SEC offensive lineman Randy Thomas.

It mentioned how the Georgia native had played junior college football at Copiah-Lincoln Community College. The story was focused on how he’d been asked to leave every all-you-can eat buffet in the nearby town of Brookhaven. Thomas played at Co-Lin with another massive lineman named Craig Moore, a native of Florida. Moore also played at Mississippi State after CLCC.

Thomas told Sports Illustrated that the buffet owners weren’t rude, but they politely asked the duo to leave before they ate the businesses out of house and home.

Golden China and Pizza Hut probably don’t remember the destruction wrought on their buffets by these two future SEC behemoths but seeing the word Brookhaven in one of the most-read magazines in the world made an impression on me.

This week Thomas was inducted into the Mississippi Community College Sports Hall of Fame. During his time in the NFL for the Jets and Redskins, Thomas was known for his durability and versatility. He could play any position on the line and was one of the best run-blocking interior lineman in the league.

Late in his career a recurring tricep injury kept Thomas off the field. As a Jet he started 61 games over four seasons including all 16 during his rookie year of 1999.

When Thomas signed with the Redskins in 2003 he was back in Sports Illustrated again, but this time for something bigger than how many pieces of pizza he could eat. The Ol’Ball Coach Steve Spurrier had completed his first season as the head coach of the Washington Redskins and the team was looking to make a big splash in free-agency. DC owner Daniel Snyder acquired 17 new players that offseason.

The Redskins signed Thomas to a seven-year, $28 million contract. It’s fitting that the same week Thomas was honored for his years at Co-Lin another CLCC football alum, Montez Sweat, was selected in the first round of the NFL draft by the Redskins.

Let’s hope that Sweat loves his alma mater the way that Thomas does Co-Lin. For Thomas the bond is strongest with longtime CL football coach Glenn Davis. Davis recruited Thomas to Co-Lin when he was an assistant for then-head coach Phil Broome. When Thomas and Moore went to State to play for Jackie Sherrill, Davis went with them as an MSU assistant coach.

“The Mississippi State coaching staff told me about Randy when I was an assistant at Holmes,” said Davis. “When I got hired at Co-Lin I called him and let him know I was leaving Holmes. The Holmes administration called Co-Lin president Dr. Billy Thames and accused us of trying to steal players from them. Dr. Thames said give him two weeks and if he hasn’t signed with Holmes by then, go get him.”

Thomas grew up in a single-parent home and credits Davis as being a strong influence in his life, a coach who gave Thomas some of the best advice he ever received.

“We signed him as a defensive lineman,” said Davis. “There was a hole on the offensive line and he had the tools to make that switch. We sat him down and talked to him about what it could do for his future. After he got drafted he called to thank me for looking out for him through those years, there’s just always been a strong connection between us.”

Every year after the hectic recruiting season ends for the Co-Lin staff and before summer workouts begin, the Davis family and the Thomas family get together. Thomas and his wife Teresa have four children, Brandi, Randy, Teri and Cameron.

A few years ago, when Thomas was put into the Co-Lin Athletics Hall of Fame I asked him if he remembered being recognized in SI for his prodigious appetite. Thomas smiled and laughed at the question. Of course, he said. “We set up shop at a buffet and they knew they would lose money if they didn’t try to reign us in,” he said with a laugh.

The now svelte Thomas shuns bread for lean protein. He’s the best kind of NFL success story. One who made a ton of money, has invested wisely, and has a large family and good health to enjoy in his retirement.