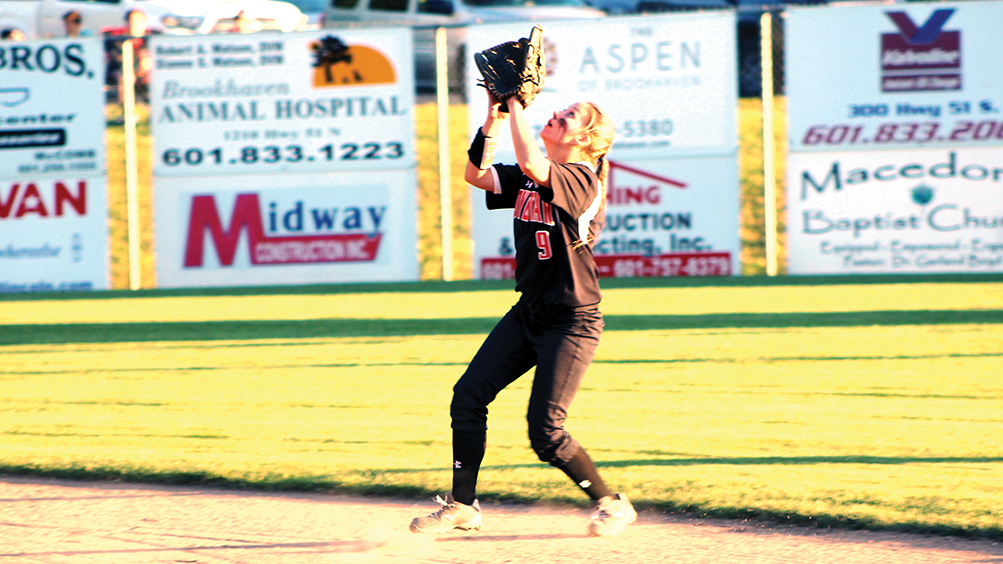 Photo by Cliff Furr Loyd Star second baseman Baylee Zumbro settles under a pop-up Friday against Enterprise-Clarke. Loyd Star had their season ended in the south state semifinals by an Enterprise team that now moves on to play Taylorsville.

The Enterprise-Clarke Lady Bulldogs have been considered one of the favorites for the MHSAA 2A state title all season and they looked the part in sweeping Loyd Star this weekend. The Lady Bulldogs from Lauderdale County beat Loyd Star 10-2 Friday and completed the sweep on Saturday with a 6-0 win on their home field.

Friday Enterprise scored two runs in the second inning to jump out to an early lead. The Lady Bulldogs (24-3) outhit LS 11-2. The Lady Hornets also committed five errors. Eighth grader pitcher Carson Hughey gave up three earned runs and struck out two for LS. Emma Herrington of Enterprise gave up a pair of hits and one earned run while striking out two. Malori Cade and Poole hit safely for Loyd Star and Alyssa Leggett and Baylee Zumbro each drove in a run.

Saturday the Lady Bulldogs again held Loyd Star to a pair of hits in their series clinching win. Carly Beth Wallace and Aubrey Britt hit safely for the Lady Hornets. Enterprise moves on to the south state championship series against Taylorsville.