Cougars walk off with South State title over NCA 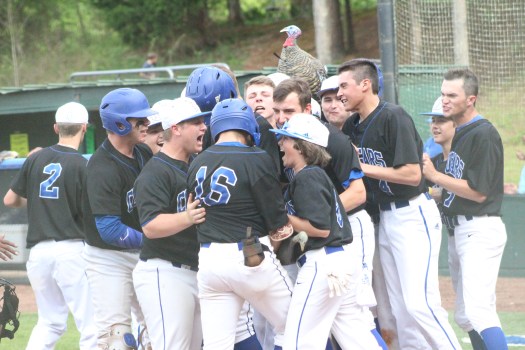 Junior infielder Brady Spring is swarmed at the plate after hitting a first inning home run that put BA up 2-0. Newton County led 3-2 in the bottom of the seventh before a Cougar comeback pushed across two runs to end the series. Photo by Cliff Furr 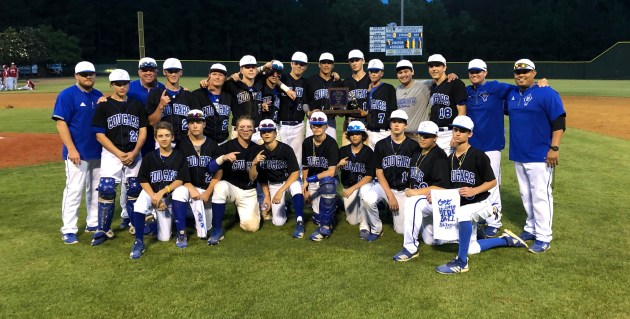 Dawson Flowers kept the bat on his shoulder and had a walk-off walk for the Brookhaven Academy Cougars Wednesday night. Flowers drew a bases loaded walk in the top of the seventh that scored Keegan Smith and gave the Cougars a 4-3 win over Newton County Academy (17-14). The victory meant BA swept the MAIS AA South State series and moves them on to a state championship matchup next week against Tri-County Academy.

Brookhaven Academy (19-9) head coach Tyler Parvin says it’s a credit to the type of teammate Flowers is in that his senior captain was content to win the game without swinging the bat.

“I think it was the ultimate team act for Dawson not to swing the bat, a lot of kids would have swung it, but he knew he could win it for us without doing that,” said Parvin.

The Cougars jumped up 2-0 in the top of the bottom of the first on a Brady Spring home run. The junior third baseman hit a no-doubter over the right field wall at Williams-Gillis Ballpark that had the big crowd of Cougar fans on their feet.

Flowers had previously reached on a hard-hit single to the left-center gap off NCA junior starter Hayden West. Spring took a ball on the first pitch he saw but had a feeling he knew what West would be offering.

“I was looking first pitch fastball,” said Spring. “With a runner on I wanted to do some damage, I knew it was gone as soon as I hit it.”

BA was coming off a 12-3 whipping of NCA in game one on Tuesday. Jumping up early in game two made it look like the Cougars would cruise to another win.

West settled in though after the first inning and only gave up three hits from then on. NCA had runners on first and third in the first when BA starting pitcher Tanner Watts got a strikeout to end the threat and inning.

The Generals had better luck in the second when they generated a pair of runs. With the bases loaded after two singles and a walk, Hays West then smacked a single that scored two runs to tie the game 2-2.

That left runners at first and third with Kemp Alderman coming to the plate. Alderman is a hoss of a pitcher and catcher. The son of NCA head coach Kelly Alderman, Kemp is committed to Ole Miss and looks the part of future SEC slugger.

Parvin knows all that well and knew that he wasn’t going to let Alderman show his power. The Cougars intentionally walked Alderman in all four of his plate appearances Wednesday. In the win Tuesday they walked him twice.

Alderman was intentionally walked in the second to load the bases and Watts made his coach look good by getting a Hayden West flyout to end the inning.

Watts had been full of emotion coming off the mound to end the first and the junior felt like he might have gotten a little too pumped in the early going. He also made an equipment adjustment that helped settle him in. The field was slick from a pregame shower and that affected his early work.

“I tried to be too perfect in the beginning and it started getting into my head,” said Watts. “I also changed cleats after I kept slipping on the mound and after that I started dealing.”

The game remained 2-2 until the top of the seventh when NCA took their first lead of the game. With two outs and one aboard, Parvin pulled Watts who had thrown 112 pitches and replaced him with eighth grade left-hander Judson Griffin.

The NCA runner on first moved to third after two wild pitches. An infield single by Dalton Sibley scored the Newton go-ahead run. Sibley moved to second after the next batter was hit by a pitch, but the young Griffin shook it off to get a fly-out that ended the inning.

The Coogs were down, but their energy remained high. The dugout of younger Cougars kept up the chants and cheers as BA began to make their move with only three outs remaining.

“Our dugout energy has been crazy good the entire playoffs,” said Spring. “Our younger guys do a great job of keeping us upbeat.”

Watts began the rally with a walk and moved to second on a perfectly executed sac bunt by Griffin. Senior Keegan Smith hit a groundball that NCA couldn’t handle. The error put him on first and Watts on second.

Sophomore Collin Waldrop tied the game at 3-3 when he smacked a driving double that scored Watts and put Smith at third, setting up Flower’s winning walk.

“Their guy was throwing a lot of curves and keeping us off balance,” said Flowers. “He was changing it up and making big pitches. It looked like he got tired at the end.”

BA moves on to the face Tri-County Academy the AA state championship series next week. It’s a rematch of the series from last season that the Cougars swept 2-0. Game one will be hosted by Tri-County in Flora while game two will be played at Williams-Gillis Ballpark at BA. If game three is needed it will follow game two.

“Playing in the state championship is something different,” said Flowers, “It’s a different feeling, pumped to be going back.”