‘Coach’ marks a decade at Exchange Club with award 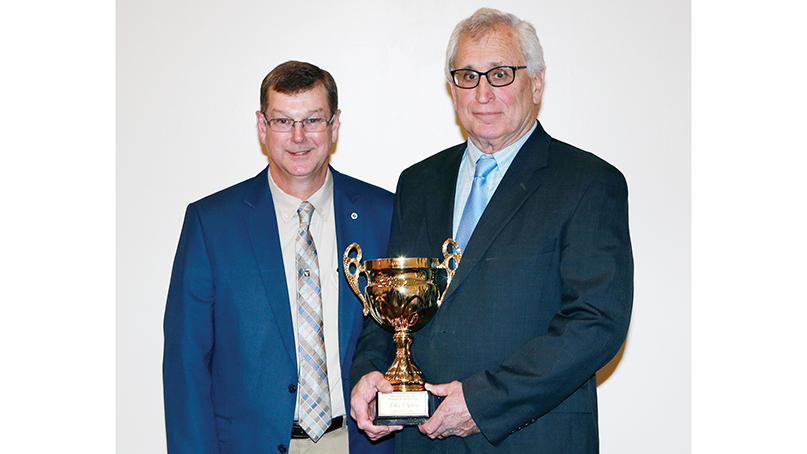 People called him “coach” for years — some still do — but John Ogden is probably better known for his work with the Exchange Club these days.

He works the Ferris wheel at the fair and is quick to say “hello” to just about anyone he crosses paths with.
Ogden recently received the John L. Leary Memorial Award at the 71st annual Golden Deeds banquet. The award is presented in honor of Leary, a charter member of the Exchange Club in the 1940s who went above and beyond in his acts of service.

To be eligible for the award, a club member must be nominated.

“Each year we honor a member who goes above and beyond to serve their community,” Golden Deeds committee chairman Ricky Lagrone said.

The award goes to an Exchange Club member who gives their time and talents in order to benefit the community.

When asked about Ogden, Lagrone had nothing but kind words to say.

“He was at anything we ever needed him for,” Lagrone said. “He’s always one of the first to volunteer. If he can be of help, he’s there.”

Ogden, 64, is a resident of Brookhaven. He is originally from Crosby.

He is a retired teacher and coach from the Brookhaven School District. He holds a specialist’s degree from Jackson State in education administration and supervision.

Ogden has been married to his wife Sally for 39 years. They have two children; a son and a daughter; and four grandchildren. He attends First Baptist Church of Brookhaven.

This fall, Ogden will celebrate a decade of membership with the Exchange Club. The organization invited him to become a member and he accepted.

When asked about the award, Ogden said he was not expecting to receive it.

“I was surprised. I was hoping someone else would get it,” he said.
Ogden enjoys volunteering with the Exchange Club, and says his favorite event to work is the fair.