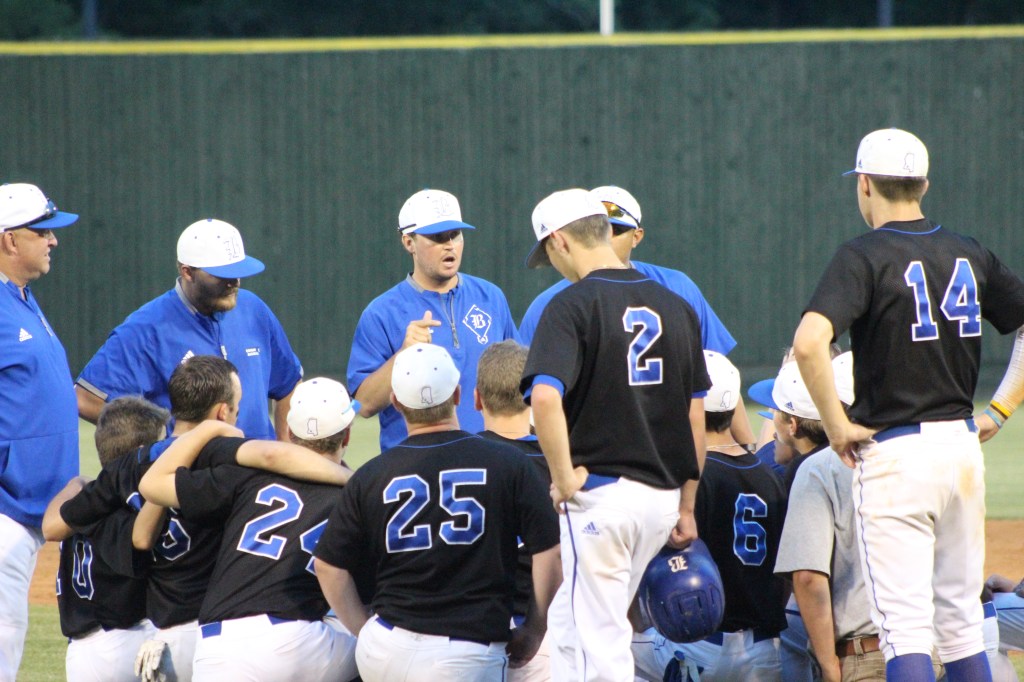 You could be forgiven if it feels like you’re coming down with a case of deja vu. The Brookhaven Academy Cougars are back in the MAIS AA State Championship series for a second straight year. They’re also playing the same team they defeated last season in the title tilt, Tri-County Academy. And it’ll probably rain next week when the two teams are scheduled to play, just like it did last year.

All that withstanding, there is a big difference in the Cougar team that coach Tyler Parvin has trotted out this season compared to the championship squad he fielded last year.

The title team last year was ripe with expectations. They had slugger O’Neill Burgos in his senior season. The 2017 Cougars had finished 11-13, but the squad had experience returning in a senior core of Burgos, Taylor Freeny and Levi Smith. The roster was further burnished when Tucker Watts, Tanner Watts, Dawson Zumbro, and Harrison Brownlee transferred to BA from Loyd Star.

The power in Tucker Watts’s bat protected Burgos in the lineup and allowed him to see more pitches. I joked at the time with Parvin that the MAIS had already mailed the AA state championship trophy to Brookhaven.

It was a bad joke that Parvin had already heard many times. A laid-back personality in life and in coaching, Parvin told me he’d started sitting on the visitor’s side at football games to escape talk of how good his baseball team would be. He knew more than anyone that expectations and results are two different animals.

However — in the case of his 2018 team — the preseason expectations and on-field product went hand in hand. BA finished 24-8. They lost 5-4 to MHSAA 6A Warren Central. They beat MHSAA 5A Pearl River Central and dropped a one run game to public school powerhouse Sumrall.

Their only postseason loss was to Centreville, a 9-2 defeat in game one. BA bounced back to win game two 11-3 and game three 19-0. In the title series the Cougars beat Tri-County 12-6 and 14-4 to claim the first state title for the school since 2010.

Burgos hit 11 home runs and signed with Jones College. Watts drove in 31 RBIs and signed with Southwest. The Cougars got their rings, but with only one returning senior in infielder/pitcher Dawson Flowers, it would be fair to say that expectations for the 2019 team were a little more guarded.

Help comes from the school’s halls

Flowers wouldn’t end up being the only senior on the roster when the season rolled around. He was joined on the team by two of his best friends and fellow seniors, Cade Brown and Keegan Smith.

Brown was an All-State player in football and basketball for the school. The Daily Leader Most Valuable Player in football, Brown had not played baseball since his freshman year. After telling Parvin early in the school year that he would play baseball, Brown followed through when basketball season ended and picked up a glove for the first time in a long time. Brown ended up at second base and batting leadoff. The only way you would know that he hasn’t been playing baseball for the last two years is if someone told you — he looks like a natural.

Brown wasn’t the only senior who came back to baseball in 2019. Smith has always played soccer and football for the blue and white. He hadn’t been a part of the baseball team since junior high though. Smith has been solid as a rock in right field. The way he tracks ball and runs down fly outs has definitely been honed by extra practice and repetition.

That’s something that you hear from top to bottom when talking to this team. They got better as the season went on and they credit practice for making that happen.

“We had so much raw talent last year,” said junior pitcher Tanner Watts. “We could have not practiced and still won. This year we’ve had young kids stepping into big spots for us and some other guys who weren’t on the team last year. It took us a while to grow into a team. It took us practicing situations for everyone to get more confident.”

Deep pitching staff a weapon in 2019

The thing that sets BA apart from nearly every team they play is their pitching depth. The Cougars have a slew of arms they can lean on. Flowers has settled in to the No. 1 starter role and is 5-2 in 10 starts. The Gulf Coast signee has a 1.21 ERA and a team high 67 strikeouts in 57.2 innings pitched.

Watts has struck out 60 in 49 innings and has a 2.42 era. His season started slowly as he worked back onto the mound after having knee surgery in August 2018. Watts was injured in a football game and has only gotten stronger as the season progressed.

Parvin also has a pair of lefthanders that he can use in eighth grader Judson Griffin and sophomore Caston Thompson. Thompson has struck out 32 in 24.2 innings. Griffin is 3-1 while only starting one game. Junior Brady

Spring has a 2-0 record and a 1.31 ERA as a reliever. Junior Nick Ogden is 3-0 and has 17 strikeouts in 10.2 innings of work. Sophomore Collin Waldrop has struck out nine in 7.2 innings of relief appearances.

“Judson comes in and throws strikes and Nick has had some big save situations for us this year,” said Flowers. “We’ve got a lot of different guys that bring different stuff.”

The season got off to a slow rolling start as BA battled weather that canceled games and Flowers and Brown stayed with the basketball team through the state tournament. A 1-5 record in the first six games included loses to Simpson, Parklane and MRA.

It may have been the Saturday that MRA beat BA that began a turning point for the season. The Patriots blasted the Cougars 8-1 at Hartfield. BA bounced back to beat Hartfield later in the day on the Hawks home field. Since that extra inning 6-5 win over Hartfield Parvin and his team are 17-3 and have won 10 games in a row.

The Rebels from Flora are 19-8 and spanked Winona Christian and Central Holmes Christian thus far in the postseason. Coach Graham Odom and his team are 9-1 in their last 10 games.

Tri-County has a Gulf Coast signee of their own in senior right-hander Dawson Walters. In game one of the North State Championship series Walters no-hit Central Holmes and only had three pitches put into play.

The big bat in the Rebel lineup is senior first baseman Trace White. The 6-foot-3, 250-pound White has seven home runs thus far this season. White and Walters are part of a six-man senior class for TCA. Junior right hander Hayden Bosarge is the second man in the Rebel pitching rotation.

Tri-County hosts game one of the three game series Tuesday at 6 p.m. BA hosts game two at Williams-Gillis Ballpark Thursday at 5 p.m. If game three is needed it will immediately follow game two.