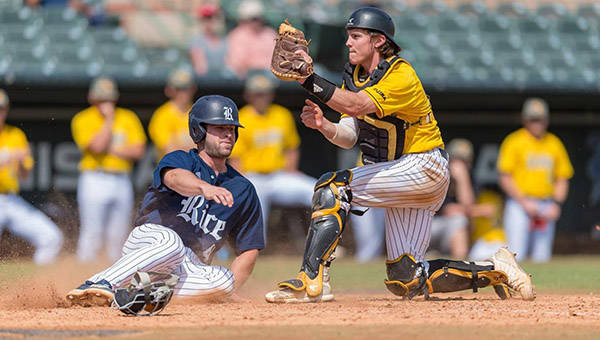 HOUSTON — Andrew Dunlap singled in two runs and Justin Collins added a two-run home run to cap a four-run first inning as Rice picked up a 7-2 victory over Southern Miss on Sunday.

The Golden Eagles got nine hits on Sunday. Gabe Montenegro, Cole Donaldson and Will McGillis had two singles each, but the visitors left 11 runners on base, including two in each of three of the last four innings.

Rice (23-28, 14-13) collected all four first-inning runs off of Golden Eagle starter Jarod Wright (0-3), who gave up four hits and faced six batters while getting two outs.

Cody Carroll then gave Southern Miss six strong innings of relief, only allowing a two-run homer to Cade Edwards in the sixth. The Owls added a solo run in the eighth on an RBI double from Collins.

Rice starter Jackson Parthasarthy (4-7) limited the Eagles to one run on seven hits and two walks over 7 1/3 innings. He had five strikeouts. After Dalton Wood came in and walked two Golden Eagles, Garrett Wood came in and threw the final 2 2/3 innings, which included fanning the side in the ninth.

Southern Miss scored both of its runs in the seventh inning. McGillis singled with one out, and after back-to-back walks he scored on a wild pitch. Hunter Slater then knocked in a run with a single.

OXFORD — Mississippi State has its own beautiful ballpark in Starkville. It only feels like it owns the one in... read more