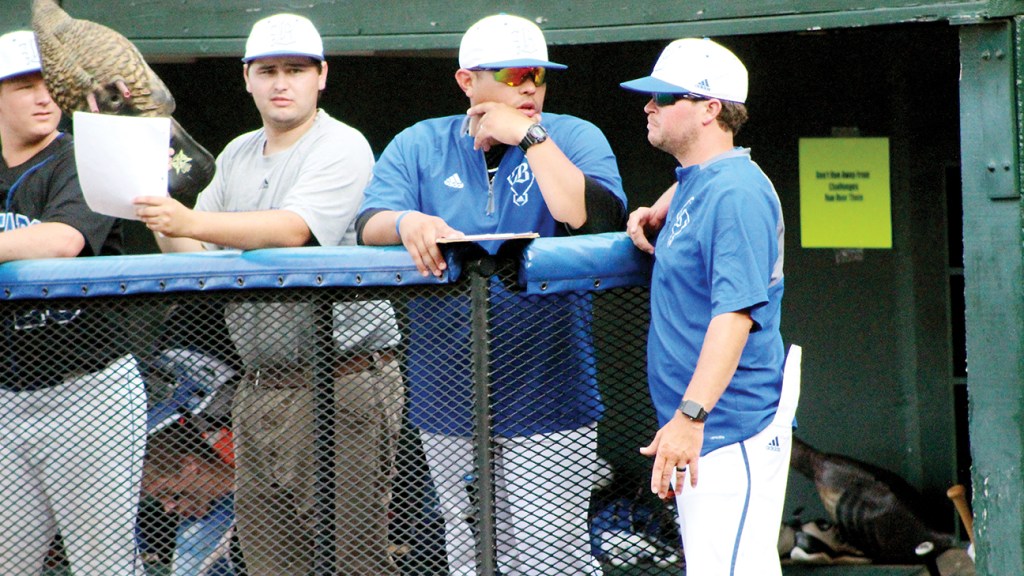 Brookhaven Academy defeated Tri-County Academy 15-13 Tuesday night in game one of the MAIS AA State Championship series in Flora. Getting to that final score was a wild ride that saw the Cougars fight back from behind for the entire game.

“I don’t even know what I told them after the game,” said BA head coach Tyler Parvin. “I know I told them I was proud of their fight and how they never gave up, but honestly it had been such a crazy night, I can’t remember a word I said.”

Game two begins tonight at 5 p.m. at Williams-Gillis Ballpark. If game three is needed it will be played immediately following game two.

All appeared normal for the first three innings Tuesday night. Tri-County led 2-0 behind a pair of solo Garret Ford home runs. Both starting pitchers, Dawson Flowers of BA and Dawson Walters of TCA, have signed scholarships with Gulf Coast Community College. The Dawson duo worked out of some early jams and appeared to be settling in for a pitching duel.

BA got on the board in the fourth after junior Nick Ogden hit a double and reached third on an error. Ogden then scored on a Tanner Watts groundout that cut the lead to 2-1.

The Rebels chased Flowers from the mound in the bottom of the fourth when they plated four runs to take a 6-1 lead. The senior gave up two earned runs and struck out three while walking one and giving up three hits. Flowers only threw 58 pitches and will be available to pitch today if needed.

Eighth grader Judson Griffin spelled Flowers on the mound. With runners on second and third Griffin forced a fly out to end the inning.

The Cougars came back with six runs in the top of the fifth to send Walters to the bench. He threw 113 pitches in 4.2 innings and won’t pitch again in the series. None of the six runs he gave up were earned as he struck out five, walked three and only gave up a pair of hits.

Collin Waldrop and Cade Brown both reached to begin the fifth after back-to-back TCA errors. Another Rebel error on a ball hit by Brady Spring scored Waldrop and moved Brown to third. Caston Thompson drew a walk and with the bases loaded Tanner Watts also drew a walk that scored Brown. Griffin then doubled to clear the bases and scored Spring, Thompson, and Watts — tying the game 6-6. Griffin scored later in the inning on a Waldrop fly ball that Tri-County played for another error and BA led for the first time, 7-6.

After Griffin walked the first batter he faced in the bottom of the fifth he was replaced by junior Spring on the mound. Spring got two outs in the fifth but gave up five runs — three earned — after walking four and allowing a pair of hits.

With TCA back ahead 11-7 and two runners in scoring position, Parvin put all his chips in the middle of the table as he replaced Spring with junior starting pitcher Watts. Watts has been the second game starter for the Cougars all season, but Parvin knew his team needed to stop the bleeding and get out of the inning.

“We put Tanner in to finish the inning and then the thought was to see how we did at the plate and keep him in there if we kept it close,” said Parvin.

Watts had a wild pitch that allowed TCA to go up 12-7 before getting a strikeout to finish the inning.

BA bounced back in the top of the sixth with a Flowers single, a Spring walk, and a Thompson three-run home run that pulled the Cougars within 12-10. The Rebels were able to get out of the inning without more damage being done via a double play that came with the bases loaded.

Watts worked quickly through the bottom of the sixth as he only faced four batters.

Brown began the top of the second with a solo home run — the first of his career — to cut the TCA lead to 12-11. Spring tied the game with an RBI single and then the defending state champs went up 13-12 when Griffin drew a bases loaded walk. A Keegan Smith sac fly scored another run and the final BA score came when Waldrop hit an RBI single that made it 15-12.

Watts struck out the first two batters he faced in the seventh before an error and then a double cut the Cougar lead to two runs. With the tying run at the plate Watts forced a groundout that ended the game and set off celebration in the large Cougar contingent that had made their way to Flora.

A key for BA was using four different pitchers to spread out the pitch count on Tuesday. All the arms used in game one will be available for more innings if needed tonight. BA also has the left-handed Thompson to use along with the hard throwing Ogden as another option.