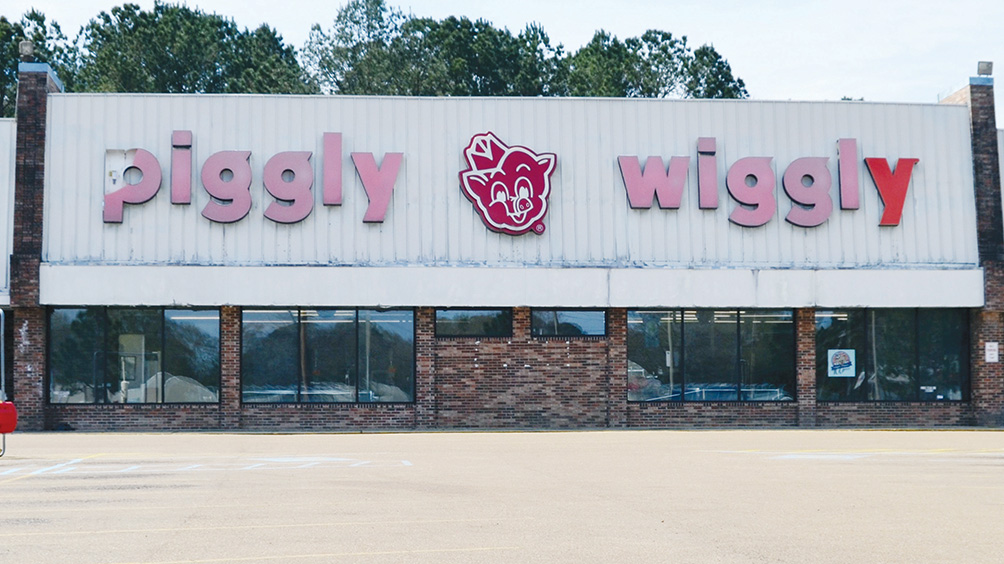 Photo by Donna Campbell The Piggly Wiggly building and property on Hwy. 51 is scheduled to be auctioned off to cover debts to Trustmark National Bank.

One of two Brookhaven Piggly Wiggly buildings and property could be up for grabs to the highest bidder at an auction on the courthouse steps.

According to a Substituted Trustee’s Notice of Sale published today in The Daily Leader, Piggly Wiggly No. 150 on Hwy. 51 could be auctioned to pay off debts owed to Trustmark National Bank. The building and property were used as collateral for a deed of trust issued to the financial institution in 2008 by the late Harrell G. Rushing, who was president of KGG Inc., which was doing business as Piggly Wiggly in Brookhaven. Rushing, who also owned the Piggly Wiggly No. 140 on West Monticello Street, died in 2010. The deed of trust was modified in 2013.

According to the notice of sale, the loan is in default which makes the entire debt to Trustmark now due.

Real estate attorney Woody Breeland, a partner with Allen, Allen, Breeland and Allen, speaking about deeds of trust in general and not specifically about any one debtor, explained a deed of trust and what happens when someone defaults on payments.

A note is issued when someone borrows money from a lender or person with a promise to pay “this money in this manner,” he said. When someone defaults on a note, the creditor can have property taxed or file for garnishment from someone’s employer to have money withheld from the individual’s earnings.

With a deed of trust, the individual is pledging property for a loan. If the loan is not repaid, the creditor can take the property, he said.

However, there’s a last chance option to save the property from sale, Breeland said. That can happen if the debtor contacts a trustee and pays the amount needed to bring the loan current. That amount can include any outstanding debt plus the cost of collection.

The notice of sale also will be published May 29, June 5 and June 12. By running the notice four times, the trustee, by law, must sell the collateral within seven days of the last publication, Breeland said.

Several sales pitches have been made in the past several months to Glenda Rushing, Harrell Rushing’s widow, for the purchase of the Brookhaven stores. At least one, Danny Manning of Fairhope, Alabama, went on record with his intention to purchase six of the Rushing stores in March.

Manning owns several Piggly Wiggly stores in Fairhope, Daphne and Mobile, Alabama, and hoped to include the two Brookhaven stores to his list. According to Lincoln County tax records, Rushing owns the property and building at 215 Hwy. 51 N. but a New York company, Brookhaven Retail LLC, owns the building and property at 364 W. Monticello St.

Constantine said Manning planned to sign papers and take over the stores March 8, but the deal fell through.

By April 15, the doors were locked at the Hwy. 51 store with a notice that the store was temporarily closed, while the West Monticello Street location remained open, though many of the shelves were empty and had not been not restocked. That location locked its doors soon after.

Constantine said he had acquired all necessary business licenses, rented an apartment for six months in Brandon and interviewed employees. He said ultimately the deal fell through because all of the parties involved couldn’t agree to all the terms.

Mayor Joe Cox said several individuals and companies have made inquiries about the two locations.