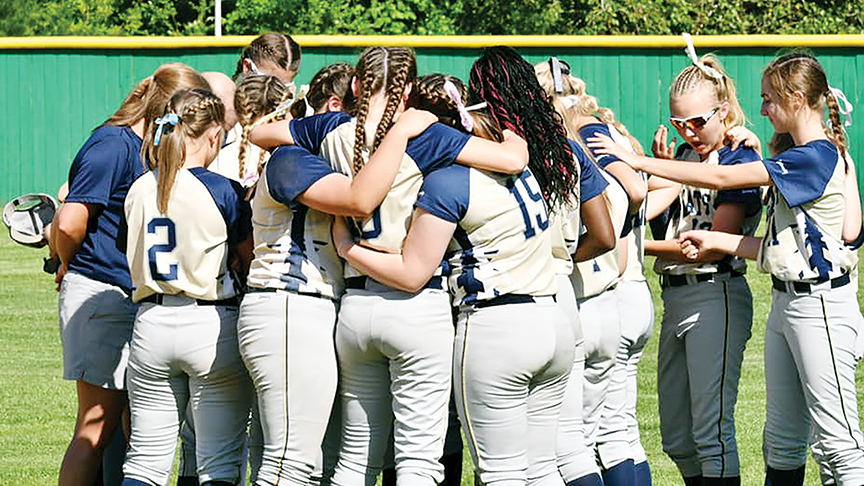 Photo by Stacy Leake Members of the Bogue Chitto Lady Bobcats lean in for a final postgame breakdown after having their season ended by Taylorsville in the playoffs.

Like with just about every other thing in this world, if you want to know about the health of softball in this area — all you’ve got to do is check Facebook.

Travel ball and weekends spent playing all over the Southern United States used to be all about baseball. Lately, though — if you look at Facebook — you might see friends and family doing the same with travel softball teams in a greater frequency than any time before.

That’s a good thing as this area has some very good high school softball teams that are loaded with young talent.

With the season complete and summer upon us, it’s time to release The Daily Leader All-Area Softball Team. It’s been a lot of fun putting this team together — which makes sense — because softball is a really fun game.

There is just something about how close the bases are and how fast the pace can be between two good teams. When a shortstop takes a hard hit one-hopper, she doesn’t have time to think about where she’s going with the ball, she’s got to instantly react and let muscle-memory take over.

Former Copiah-Lincoln coach Allen Kent would hear football players boast from time to time about how they could hit off one of his pitchers during his long tenure leading the Lady Wolves. Kent wouldn’t hesitate to get a helmet and a bat for anyone cocky enough to brag in that way. His girls always made the overly proud look like a fool.

Extra innings or overtime are always nerve wracking in any sport, but with a runner on second in the bottom of the eighth — softball can just take those jittery feelings to a new level.

Looking back before moving forward

There was a transition late last summer as I took over as sports editor. With school starting and fall creeping in, the All-Area team did not run last year. Because of that, my plan has been to make this year’s team better than ever.

Before we honor the 2019 team, let’s look back at how good things were the year before.

The 2018 season saw Lawrence County reach the state championship in 4A and the Brookhaven High Lady Panthers go 22-6 and lose to Pearl River Central in a tight playoff series. Current William Carey freshman Haley Nations no-hit PRC in that playoff series for BHS.

If you’ve got a young, aspiring softball player in your house, make sure they read through the All-Area team this weekend.

The plan was to get a quote from each player and somewhere along the way the questions began to focus on how each player had either grown their game or hope to improve in the future.

Pitching coaches and speed training were mentioned, and those things required extra commitment and money by parents. However, one of the best defensive players in the area said nothing can replace the repetitive work of taking as many ground balls as she can.

One of the best hitters in the area shared that hitting off a tee is where she can trace much of her success. A simple tool that costs little money but can make a big difference for the next generation of All-Area softball players.