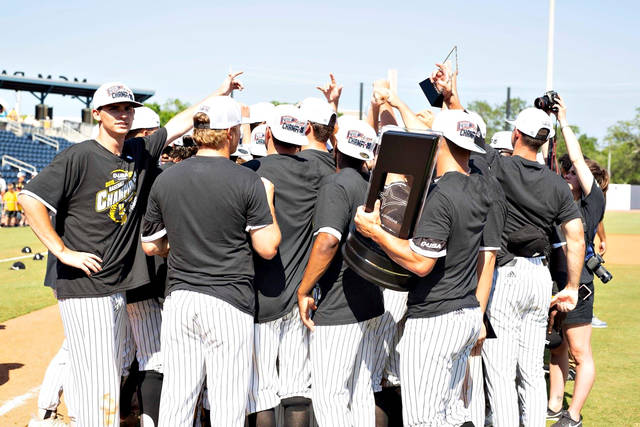 BILOXI — Southern Miss baseball coach Scott Berry figured his Golden Eagles would have to win this week’s Conference USA Tournament to earn a spot in the NCAA Tournament.

Thanks to a gritty, five-man pitching performance and just enough offense Sunday afternoon, they went out and did just that.

“We talked in our pregame meeting: Let’s leave no doubt for the committee,’” Berry said. “Let’s go ahead and get this thing done. Let’s pick up where we left off (Saturday), and that’s what our guys did.”

Southern Miss (38-19), which lost its last three C-USA series, went undefeated in the league’s tournament to win it for the second year in a row and third time in four years.

It’s the fifth C-USA tournament title for the Golden Eagles, but the first time they’ve won it in back-to-back years.

Southern Miss earned Conference USA’s automative berth to the NCAA Tournament. It will find out Monday at 11 a.m. where it will head for the regional round when the 64-team field is announced on ESPNU.

“This was a new season, and we were starting over,” said Southern Miss outfielder Matt Wallner, who was named the tournament’s Most Valuable Player. “We had to get back to the team I know we can be, and that’s what we did this week.”

Three pitchers combined on a no-hitter in a 6-0 win in the semifinals over Rice on Saturday, and then five helped hand Florida Atlantic (40-20) its first shutout loss in 110 games.

Toss in a scoreless ninth inning by Marshall Thursday, and Southern Miss pitching finished on a 19-inning run.

“What can we say?” Berry said. “Eighteen shutout innings over the last two days. FAU has the best offensive approach of any team we’ve faced and to keep them off the board was pretty incredible by our staff.”

That effort included appearances by a pair of pitchers who started for the Golden Eagles Wednesday and Thursday.

Walker Powell started the game, and scattered five hits over four innings. He escaped a bases-loaded situation in the first inning by getting an inning-ending double play.

“The difference was the beginning of the game,” FAU coach John McCormack said. “We had the bases loaded, one out and we weren’t able to convert. They were. So, congratulations to them. We have to be better. We had some opportunities. We have to score some runs, and we weren’t able to do it, but credit Southern Miss’ pitchers. They did a great job.”

Powell was followed by Sean Tweedy for 1 1/3 innings, then left-hander Stevie Powers, who started Thursday’s game.

Powers (5-4) got the win, allowing two hits in 2 2/3 innings. He, in turn, was followed by Carroll and Hunter, who split the ninth inning. Hunter got the save by getting the final two outs with runners on second and third.

Southern Miss pushed across a single run in the second inning on Danny Lynch’s RBI single, then made it 3-0 in the third on Wallner’s check-swing blooper into left field and a groundout by Cole Donaldson.

Lynch scored the final run of the game on Matt Guidry’s single in the seventh inning.