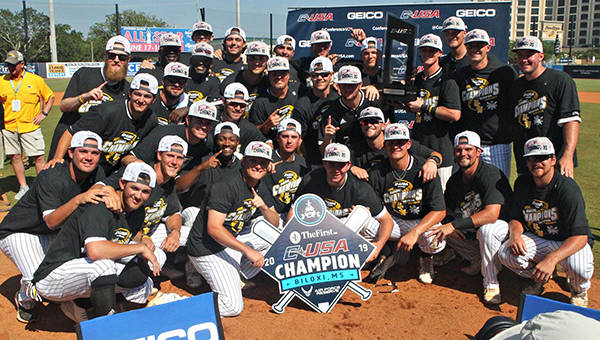 With an RPI ranking in the low 50s and not a lot of quality wins on its resumé, Southern Miss knew its only path to qualify for the NCAA Tournament was to first win the Conference USA Tournament.

The Golden Eagles beat Florida Atlantic 4-0 on Sunday to cap an undefeated run through the bracket and win their third C-USA title in four years. On Monday they got the reward, a spot in the 64-team NCAA Tournament for the fourth year in a row.

Southern Miss (38-19) will head to Alex Box Stadium for the Baton Rouge Regional beginning on Friday. It will play Arizona State (37-17) in the first round of the double-elimination regional.

“We talked in our pregame meeting: Let’s leave no doubt for the committee,’” Southern Miss coach Scott Berry said after Sunday’s C-USA championship game. “Let’s go ahead and get this thing done. Let’s pick up where we left off (Saturday), and that’s what our guys did.”

Host LSU (37-24) takes on Stony Brook (31-21) in the other first-round game. That’s a rematch of their 2012 super regional series when Stony Brook upset LSU to reach the College World Series.

The Baton Rouge Regional certainly has plenty of storylines and firepower. LSU and Arizona State have combined for 11 national championships — although none since 2009 — and that first-round game between LSU and Stony Brook will bring back plenty of flashbacks to the 2012 super regional.

Arizona State is making its return to the NCAA Tournament after a two-year absence. It lost its last three full series, however, and is 6-9 over its last 15 games.

Southern Miss was in a similar rut before getting hot in the Conference USA Tournament in Biloxi.

The Golden Eagles posted back-to-back shutouts — one of them a combined no-hitter — in the semfinals and finals. They finished the tournament on a run of 19 straight scoreless innings, and allowed runs in only two of the last 27 innings.

With the 4-0 win over Florida Atlantic (40-20), Southern Miss handed the Owls their first shutout loss in 110 games.

Florida Atlantic, the regular-season C-USA champion, still received an at-large bid to the NCAA Tournament. It is headed to Georgia’s Athens Regional and will play Florida State in the opener. Georgia and Mercer are the other teams in that regional.

The winners of the Baton Rouge and Athens regionals will play each other in next week’s super regional round for a trip to the College World Series.

“What can we say?” Berry said on Sunday. “Eighteen shutout innings over the last two days. FAU has the best offensive approach of any team we’ve faced and to keep them off the board was pretty incredible by our staff.”

Now the Golden Eagles are heading into the NCAA Tournament with a newfound momentum. They won’t have an easy task by any means, but none of the teams in the Baton Rouge Regional have been invincible, either.

LSU was 27-8 at Alex Box Stadium this season, but struggled against non-conference competition in midweek games. It lost at home to McNeese State and Louisiana Tech, and on the road against Southern University and Louisiana-Lafayette.

Stony Brook won the America East Conference championship, but is ranked No. 138 in RPI. Arizona State finished fifth in the Pac-12, which only had six teams with more than 30 wins.

“This was a new season, and we were starting over,” Southern Miss outfielder Matt Wallner, who was named the C-USA Tournament’s Most Valuable Player, said on Sunday. “We had to get back to the team I know we can be, and that’s what we did this week.”