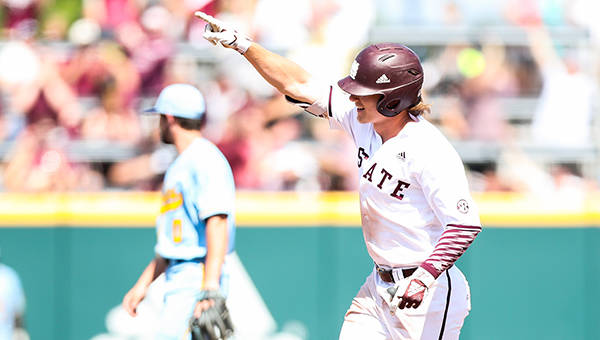 STARKVILLE (AP) — What was supposed to be a smooth ride turned into a battle for survival for Mississippi State.

The starting pitcher left early with an injury. The opponent seemed to have an answer for every big hit and refused to go away quietly.

In the end, however, the Bulldogs showed why they’re a contender for the national championship.

Rowdey Jordan had four hits, including a homer, Jordan Westburg hit a crucial two-run single and No. 6 national seed Mississippi State rallied to beat surprisingly stubborn Southern University 11-6 on Friday in the opening round of the NCAA Tournament.

Mississippi State (47-13) didn’t pull away until scoring three runs in the seventh to take the lead for good at 9-6. Westburg’s hard grounder through the left side of the infield broke the tie.

Mississippi State advanced to play the winner between Central Michigan and Miami on Saturday night, while Southern (32-23) gets the loser at noon.

“It was a little bit of everything today. We took the lead. Then, we lost the lead, and they tied it back up. There was a lot of emotions today. The fans were unbelievable. I felt like the dugout was rocking at times when we were in there. It got the kids used to it, and it is what postseason is about,” Mississippi State coach Chris Lemonis said.

Southern (32-23) played well on offense, pounding out 11 hits. The Jaguars took a 4-2 lead after scoring three runs in the fourth and Johnny Johnson’s two-run homer in the seventh — which bounced off Jordan’s glove as he tried to leap over the wall and catch it — tied it at 6.

Mississippi State was forced to dip into its bullpen much earlier than expected. Right-hander J.T. Ginn, the Southeastern Conference Freshman of the Year, left after only three innings because of an injury.

“He was just sore. Then, he got in that long inning, and it just tightened up on him a little bit,” Lemonis said. “I thought he was really good for three innings, but we had that really prolonged inning. Could he have thrown? He is telling me he can throw. You could see it on his face. You just can’t leave him out there. We will evaluate him and see where he is at.”

Brandon Smith replaced Ginn on the mound and gave up three hits, a walk and three runs in only two-thirds of an inning. Jared Liebelt followed and allowed two runs in 3 1/3 innings. Liebelt (2-0) wound up getting the win, although Cole Gordon was by far the pitching hero for the Bulldogs.

Gordon worked the last two innings without giving up a run. He allowed one hit and one walk and struck out six for his 10th save of the season.

“Those two seniors who went out there, I thought Cole was excellent today,” Lemonis said. “Not what we wanted to do, but this is survive and advance. You win, and you move on. Then, you figure out tomorrow. We have a deep bullpen. Those guys are pretty durable too. I think we will have to use them again sometime during this tournament.”

After Johnson’s home run tied the game in the top of the seventh inning, Mississippi State pulled ahead in the bottom half.

Westburg’s two-run single gave the Bulldogs an 8-6 lead and Jake Mangum scored on a wild pitch for another run. In the eighth inning, Jordan lifted a two-run home run well over the right field wall to push the lead to 11-6 and finally give the Bulldogs some breathing room.

Jordan finished the game 4-for-5 with three RBIs and three runs scored. Josh Hatcher had two hits and two RBIs, and Dustin Skelton was 2-for-4 with two runs scored.

“It was great,” Jordan said of his home run. “It is awesome playing in a regional when everything is just elevated. The competition is elevated, the emotion is elevated. It was nice to come through in a situation like that, awesome feeling.”

When they got within one win of the College World Series championship round last season, Mississippi State was a freewheeling... read more