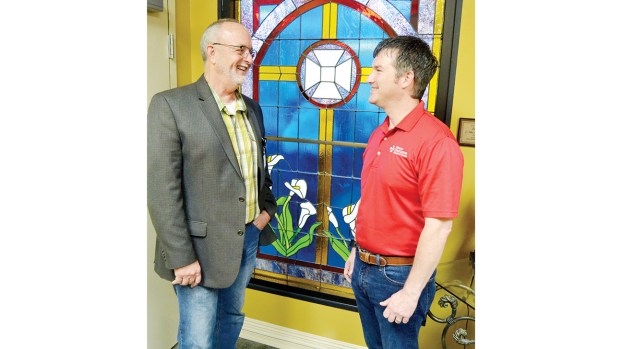 Most of the people on Woody Rimes’ list don’t know how often they’re mentioned to God.

Rimes, who has been the chaplain at King’s Daughters Medical Center since November, opens his eyes at 4:30 a.m. with prayers on his lips for the people he’ll encounter. That could be a few hundred before he’s back in his bed at night.

As chaplain, he gets to lift up people in need to God, sharing their burdens and concerns and offering comfort and consolation, not only for the patients who choose KDMC for health care, but for those who work in the hospital and clinics as well.

“I love ministering to people,” said Rimes, 58. “That’s always been my heart, just to encourage people, to walk along beside people in the midst of challenges. Just to hold their hands up because life is real and life happens every day.”

Rimes grew up in Magnolia and became an inside journeyman wireman. He moved to Baton Rouge, Louisiana, after graduation, and fell in love with his future bride Julie.

Two years later, in 1983, he was called into the ministry.

He attended New Orleans Baptist Theological Seminary, earning his associates in 1986. From 1997 to 2018, his career took him to the pulpits of five churches in Mississippi and Louisiana.

He earned his bachelor’s degree from NOBTS, his Master of Divinity from Luther Rice College and Seminary near Atlanta, Georgia, and a doctorate in organizational leadership from Tennessee Temple University in Chattanooga.

During that time, he and Julie raised five children. They have been blessed with nine grandchildren who are scattered from Louisiana to Missouri to Jayess.

“We have them all over the place,” he said.

He and his wife live in the Friendship community about 10 minutes east of McComb and he serves as interim pastor at Robinson Baptist.

He loves preaching, but he loves one-on-one time with people, too.

As chaplain, he mostly has one-time encounters with a patient and possibly that person’s family. But he’s also there every day though the week for the people who wear the KDMC logo on their uniforms, scrubs and badges.

“The joy of being the chaplain here is that I get to be a chaplain pastor to the entire hospital staff,” he said.

He starts his weekday mornings at 4:30 a.m. with scripture and devotions. He leaves home just after 5 a.m. and prays along the way. He’s at the hospital by 6 a.m. and for the next eight hours he’s hugging and listening, caring and comforting.

He divides a list of employees’ names into five sections and prays over a section one name at a time each day.

“Every week all of them will be prayed for by name,” he said.

Names of people going into surgery are on another list. They get prayer. And then there’s the list of those who are patients in the hospital. He makes the rounds to meet each of them during his workday.

“People are important. Every person that we encounter, they are special. We all have challenges. We all face issues,” he said.

Sometimes when he’s praying with a family and dealing with their needs, he’ll hear an emergency call on the intercom and see a team of doctors and nurses rushing to the ER. He can’t always leave to go with them so he adds them silently to his prayer.

“I’m just calling out their names to the Lord: ‘Father, you know what they’re facing. Father, be their hands. Be their feet. Be their heart,’” he said.

Rimes never knows what each day will bring. It could be routine surgeries, or it could be a fatal shooting. It’s impossible to prepare.

Rimes likes that the hospital also has someone pray each morning and evening over the intercom. It’s a calming, comforting time twice a day that fits into the hospital’s mission statement to offer quality health and wellness in a Christian environment.

“I had someone tell me, ‘I love this hospital. I can just sense the peace when I walk in here. There’s something different about this place,’” he said. “I said, ‘It definitely is because we aim to exalt the name of Jesus Christ.’ We’re not a church, but we understand where our strength is.”

Since taking on the duties as chaplain, Rimes has learned to change his approach with people.

He started the job with a pastor mentality, coming into a patient’s room and announcing his intentions to pray with that person.

That didn’t work, so he made some adjustments.

Now he enters a room, not as a professional with a string of degrees that shows he’s learned how to pray, but as someone who cares about each person he encounters, no matter their faith or lack thereof.

He enters a room with a smile and a hope. He introduces himself and then asks if he can offer a word of prayer. Some will readily accept and share their needs. Others aren’t as open to the opportunity.

But that doesn’t stop Rimes from praying for them anyway. He’ll tell them, “I just want you to know I will be praying for you, or I’ve already prayed for you and will continue to do so,” he said.

Rimes is a perfect fit for the hospital, said David Culpepper, KDMC’s director of marketing.

“To see Woody walking the halls, it supports our mission statement, but more than that, it supports who we are as an organization to know that we’ve got somebody who cares enough for our patients to come in and take time and say, ‘Hey God, lift them up. Take their fears. Take their anxiety. Take those things away and give them peace and give them comfort,’” he said.

Girls Night Out organizers from the Brookhaven-Lincoln County Chamber of Commerce are getting ready to have a little fun Thursday.... read more