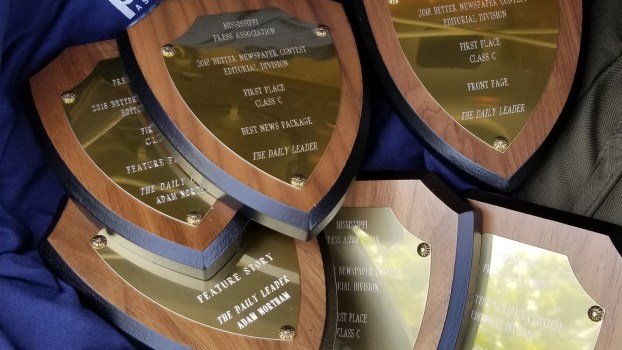 The Daily Leader brought home multiple awards — including seven first-place plaques — from the annual convention of the Mississippi Press Association Saturday in Biloxi.

The 2018 Better Newspaper Contest was judged by volunteers from the Kansas Press Association. Forty-three newspapers submitted a total of 1,937 entries into this year’s editorial contest.

“The work of these reporters, photographers, and their organizations shows the continued vital significance of community journalism,” said MPA Executive Director Layne Bruce. “We congratulate all of the winners for their efforts this year.”

Editor Donna Campbell of The Daily Leader was presented the Bill Minor Prize for General News Reporting for Dailies for her coverage of the murder of two local law enforcement officers.

“The stories concentrated not on the slayings as much as on the lives of those lost and their dedication to service to others,” judges wrote of Campbell’s work. “(She) handled the coverage of the aftermath… with empathy, compassion, and restraint.”

Campbell was also a finalist in the Associated Press Photo of the Year for a photograph of law enforcement officers at the scene of the shooting that took the lives of Cpl. Zach Moak and officer James White in September. The AP Photo of the Year finalists and winner were announced at the MPA luncheon, which was held at the Golden Nugget in Biloxi.

Founded in 1866 and now in its 153rd year, MPA is trade association representing Mississippi newspaper media.

The Daily Leader and members of the staff received several first-, second- and third-place awards for journalism excellence in categories that included daily newspapers of similar size.

• Adam Northam, Feature Story, “Well, I’d like to read your meters,” a personality profile written about Henry Carlisle of Bogue Chitto. Judges said of Northam: “You had me sitting in the living room with you, listening to the tales of his life. Great story.”

• The Daily Leader staff, Best News Package, for stories about the shooting of officers Moak and White. Judges said, “This was the best news package and it gave a grieving community detail about a huge local story. Good job.”

• The Daily Leader, Best Front Page, which included a vertical photo of Eric Knight’s street rod that was entered into the 2018 Goin’ To Town Car Show.

• Adam Northam, Sports feature, “An Assist from Above.”