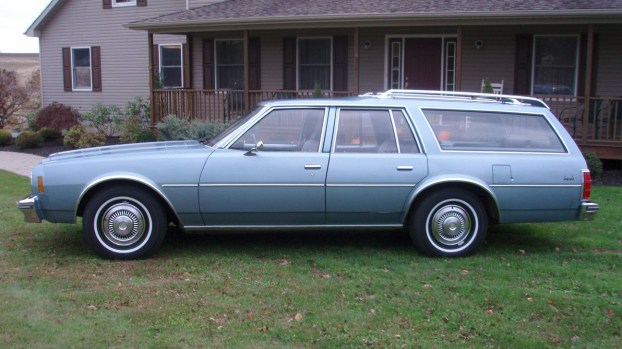 A 1977 Chevrolet Impala Station Wagon 305 V-8 Hydra-Matic very similar to the one I owned that my friends dubbed the "Batmobile." It's even the same color.

When the ‘Batmobile’ died in a blaze of glory

This was my “Batmobile,” my medium-shade-of-blue tank that I inherited from my parents. Not only was this the expected vehicle for me because it had been theirs and they were upgrading, but I think they also figured it was too tough for me to kill myself in it, or for me to kill it.

That car survived me for a few years. I could fix most things on it that broke, either because Dad or a friend showed me how or because I looked it up in an automotive manual.

The car was a decade old when it became my primary mode of transportation.

I hit a rather large chunk of concrete in the highway one day on my way back from visiting a female friend — I probably thought the car sat high enough to straddle it — and broke my starter. Thankfully, the car can keep running until needing to be started again, so I made it back to my dorm.

The next starter I broke — you  know, usually it’s just that a starter goes out, or the solenoid stops working or a cable needs replacing, right? But I actually broke another starter.

My roommate Bram and had taken a couple of lady friends to a get-together at a mutual friend’s place and were headed back to campus along the hilliest road in the western part of the ’Burg.

I may have been traveling too fast, and I may have been unnecessarily (and needlessly) challenged to “fly” by my roommate when the front end of the car left the pavement at the crest of one of those hills and slammed down about 3,000 of its 4K-plus pounds on the asphalt on the other side. When I tried to crank it the next morning, it wouldn’t.

Dad had someone pick up the car to check it out.

“The starter is broken,” he told me.

“Broken. As in there’s-a-crack-around-it broken. Any idea what caused that?”

I’d like to take a moment here to back up to my roommate. This was the guy I was riding with late one night in his Honda CRV, whipping around tight curves on the backroads near Gautier on the way to visit both our girlfriends, who lived on the Coast. When Bram noticed we were doing upwards of 95 mph, he began slowing down. That’s when the world went blue.

We pulled over at a gas station a little further down the road and the MHP trooper pulled in behind us. He asked Bram how fast we were traveling. Bram countered with, “How fast did you clock me?”

He got us at 79 mph in a 65 zone. He said he knew we had to be doing about 95, though, because he had to catch us on the winding roads to clock us.

Bram’s excuse? He didn’t know the speed limit. The trooper barked out an exasperated, “Well, it wasn’t 79!”

One day I tried to make a U-turn in the Batmobile on Hwy. 45 in Hattiesburg on the way to  another girl’s house. I looked for traffic and made my move, only to find I had completely ignored the 8-inch high concrete lane divider between the turn lane I occupied and the lanes flowing the opposite direction.

Unbeknownst to me, that busted the oil pan. On they way home from my visit the car suddenly overheated and stopped. I got out of the car and walked down the street to use a payphone, then returned to see the blaze of glory I always thought the Batmobile would go out in.

Flames engulfed the front end, from the bumper to the steering wheel. Thankfully everything in the car that was valuable was either in the far back or had been transferred to my pockets.

I’m not sure what I said to my dad when I called him that evening. Maybe I should have started out the conversation by telling him I hadn’t cracked another starter.

I know he’d have been relieved to know it.

The lesson here is obvious, I think. Women caused me car problems.

Brett Campbell, with more proof he is a car killer, can be reached at brett.campbell@dailyleader.com.

American politics has unfortunately long since devolved into a predictable battle between voters on the nation’s east and west coasts... read more