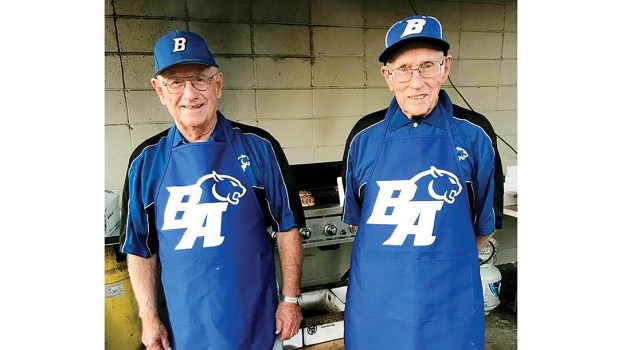 When you think about Brookhaven Academy, you think about Harold Williams. A servant with a soft voice and an easy smile, Williams passed away on Thursday at the age of 89. Williams was a loved father, grandfather and an ardent supporter of the school for 50 years.

In a county that is made up of small communities spread out and focused around schools, every school has a Harold Williams. Coaching pee-wee football, working the grill at the concession stand or keeping the scorebook for basketball. They serve without having to be asked to help. They work behind the scenes long after their kids have graduated and moved away. That’s true at BA, that’s true at Loyd Star, that’s true at Bogue Chitto and all the other school in this area.

Williams touched countless lives at BA by encouraging young people, athletes and non-athletes alike. He was a master on the grill as he cooked up burgers, chicken sandwiches and sausage dogs just inside the front gate at the football field long before anyone you know ever owned a gas grill.

When I was in fourth grade I signed up to play pee-wee football like most of the other boys in my class. Our coaches were Mr. Harold, his best friend Jimmie Gillis and Hal Myers. None of the three men had a son on the team. Harold and Jimmy had long been grandfathers at their point in their lives, but they were willing to give up their time to coach peewee football.

Myers was the hammer of the group and if you know him, you aren’t surprised. Williams and Gillis were the gentle voices that encouraged us after coach Hal insisted on one more round of Oklahoma drill. They taught us where the tackle lines up and where the A-gap is. Williams and Gillis were so tight they even shared the same birthday. They were born on the same day in the same town, Morton, in 1930.

I can’t remember how many games that team won although I think we were pretty good. I do remember how much fun we had. I remember lots of smiles and feeling like we were Hal, Jimmy and Harold’s boys.

It was youth sports at its purest form. Coaches who didn’t play favorites and tried to get everyone on the team into the action each game, no matter how limited their skills were. Coaches who grew a love of the game within their players by keeping things fun, while also keeping score and explaining what it means to win or lose. Coaches who didn’t cuss, stomp, holler, scream or need a restraining order against them for how crazy they acted.

I just feel gratitude when reflecting on what those men meant to me and so many other boys. They had wives and sons and daughters. They had careers and grandchildren and hobbies, Mr. Harold always had a huge garden behind his home on Union Street. They were just as busy then as we are today, even if we’d somehow like to think we have the market on being busy cornered in 2019. They put us through practices in the evening and traveled with us to Georgetown to play Union Academy and McComb to play Parklane on Saturdays. Giving their time, pouring themselves into others and reflecting a Christ-like attitude the entire time.

If he was physically able to be there, Mr. Harold never missed a Cougar sporting event. On the grill, in the bleachers and later in his wheelchair, he was a fixture on Brookway Boulevard Extension. In one of the best moves that the school has ever done, the baseball field was named in his honor in 2012 and then fittingly the name was later changed to Williams-Gillis Ballpark.

The last time I saw Mr. Harold I was at that field that bears his name as the Cougars were playing for the state baseball title. He was parked in his wheelchair with his eyes on the action, just like he’d been when I saw him few months earlier at the south state basketball tournament. His body looked frail, but the light in his eyes still flickered bright.

I reached down to touch his elbow and he turned and looked up at me with a slow grin crawling across his face. Maybe my first name didn’t pop into his head right that second, but the way he grabbed my hand and said, “Hey, boy,” I knew he recognized me as one of his own.

Finishing up a game that started on Monday and was postponed to Wednesday due to rain, the Brookhaven Academy Lady... read more