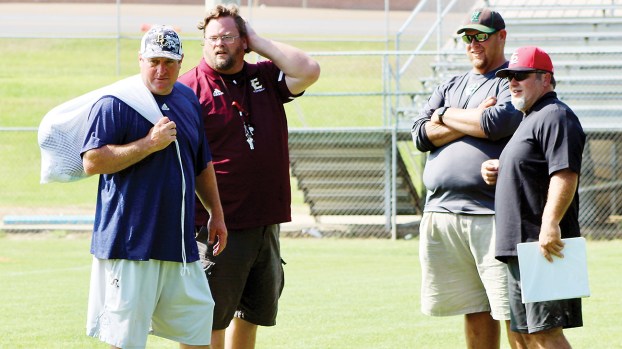 Photo by Cliff Furr All four Lincoln County school head football coaches, from left, Gareth Sartin of Bogue Chitto, Trey Woodard of Enterprise, Brad Bland of West Lincoln and Brian Ford of Loyd Star, will have their teams at Loyd Star tonight for a jamboree. The regular season begins next week for all MHSAA and MAIS high school football teams.

The last Friday before regular season high school football begins will feature many area teams tuning up with jamborees or scrimmages Friday night. Loyd Star will host county and region rivals Bogue Chitto, Enterprise and West Lincoln for a jamboree on W.E. “Sambo” Smith Field. Brookhaven Academy will host the Silliman Institute Wildcats and the Wesson Cobras will host the Tylertown Chiefs.

The jamboree hosted by Loyd Star will be a mix of varsity and junior varsity action. Teams will play full regulation quarters with each varsity team getting two quarters of play. Action begins at 6:30 p.m. with the Bogue Chitto and West Lincoln junior varsities. Then those two teams will play another period with their varsity squads facing each other.

Loyd Star and West Lincoln will then get in a junior varsity session. The final three quarters will all be varsity as Bogue Chitto will play Loyd Star, Enterprise will play West Lincoln, and Loyd Star will close things out playing Enterprise.

The full field will be used, and teams will kickoff and punt, but no rush and no return will be allowed on special teams.

Coach Ron Rushing and his staff will host Silliman out of Clinton, Louisiana on R.M. “Red” Stuard Field tonight. The varsity will go first with two regulation quarters beginning at 6 p.m. The junior high Cougars will play following the varsity with a pair of eight-minute quarters.

The Wesson Cobras will be on the brand-new turf at Copiah-Lincoln Community College tonight taking on Tylertown. H.L. Stone Stadium will be the site of a controlled scrimmage between the teams at 6:30 p.m.

Each side will get 34 offensive and 34 defensive snaps. The teams were region members the last two seasons before Wesson dropped down to 2A this season. The Cobras will be back at home on Aug. 23 in a KDMC Kickoff Classic game against Crystal Springs in Stone Stadium.