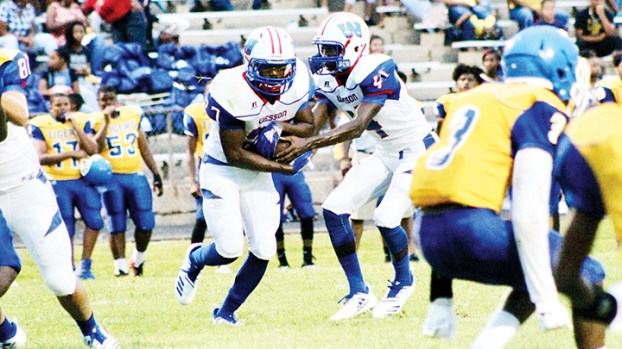 The new turf at Stone Stadium and Copiah-Lincoln Community College will be the epicenter of area school football this weekend as King’s Daughter Medical Center holds its fourth annual Kickoff Classic with a trio of season opening games.

KDMC director of marketing David Culpepper and the staff at Co-Lin go to great lengths to make the event a memorable one for the teams playing their opening game on a neutral field.

“KDMC values our partnership with Co-Lin and we want our area schools to have the opportunity to play on a college campus,” said Culpepper. “For many of these players this may be their only opportunity to play on a college field and get this type of experience. It also gets the parents and community on campus to see all the great things Co-Lin has going.”

The Cougars and coach Ron Rushing get things started Thursday night with a matchup against the Sylva-Bay Saints from Bay Springs. Last season the teams met in a game at Brookhaven Academy and the Saints dominated the second half in cruising to a 40-7 win over the Cougars.

Both schools advanced to the MAIS AA state semifinals where BA lost to Greenville-St. Joseph and Sylva-Bay lost 40-38 to Centreville Academy in three overtimes.

In the new MAIS classification the teams are in different divisions as Sylva-Bay is 3A and BA is 4A. The Saints are coached by Terry Underwood who led the team to three wins in his first season and 10 wins last season in his second year.

Sylva-Bay has a strong senior class that leads their team. Linebacker Hunter Sykes is the bell-cow of the defense and leading returning rusher Tyler Crosby is a senior as is quarterback River Thomas.

The Cougars are a team with a small senior class led by Nick Ogden and Harrison Brownlee. One thing that BA coach Ron Rushing hopes to see from his team this season is a sped-up offense. The Cougars averaged between 40-50 offensive snaps last season. In their scrimmage with Silliman last week the Cougars ran 42 plays in one half of action.

The hometown Cobras are in the spotlight on Friday night as they host county rival Crystal Springs. Wesson coach Jeremy Loy is hoping for better weather this season than when the two teams faced off in their season opener at Crystal Springs last season.

Wesson was leading 8-0 with just under four minutes until halftime when a severe line of thunderstorms moved into the area. The lightning didn’t let up as the game was eventually called off.

CS coach Tim McNair and his team finished 7-5 last season and lost a tough 28-20 playoff matchup with Columbia. The Wildcats graduated their top receiver and quarterback but do return a 1,000-yard rusher in sophomore Johnnie Daniels. Daniels ran for a team-high 18 scores last season. Keondre Davis is the leading returning tackler after making 91 stops last season as a junior.

The Cobras will be led by the play of junior quarterback Antrelle Sims. In their scrimmage win over Tylertown last week, the ultra-talented Sims caught a touchdown pass, threw a touchdown pass and ran for a score.

The Saturday night special will have coach Jesse Anderson and his 4A Cougars taking on the 3A Hazlehurst Indians.

The Indians are coming off the rare losing season for the tradition rich program as they ended last season 2-9 after going 11-3 in 2017.

Head coach Damien Gary comes back to lead Hazlehurst after previously being an assistant on a state championship winning team coached by Randall Montgomery. Gary spent the last two seasons as the head coach at Murrah High.

HHS will be tasked with stopping a potent Lawrence County ground attack. The Cougars rushed for 3,353 yards last season and scored 36 times on the ground. Senior running back Kylin Cooper ran for 1,242 yards last season and averaged 7.6-yards per carry while scoring a team-high 13 rushing touchdowns.

It’s the first matchup between the schools since 2012. Hazlehurst won that season opener 24-13 on their home field. That Hazlehurst team finished 16-0 and won the MHSAA 3A state championship.

Whenever the Wesson Lady Cobras and the Bogue Chitto Lady Bobcats (3-0) face off against each other, it’s usually a... read more