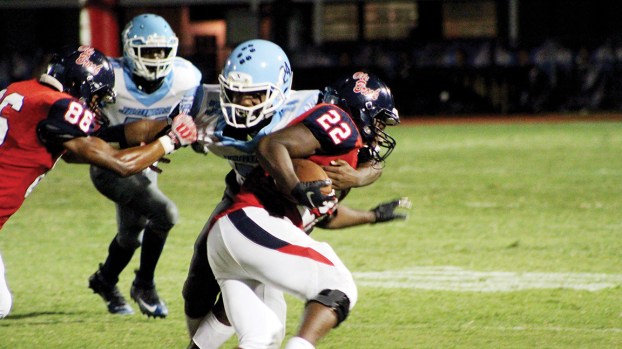 Photo by Cliff Furr Senior running back JQ Edwards will need to have a big game tonight as the Panthers hope to control the clock and time of possession against a dynamic South Pike offense. Coming off a major injury knee injury as a sophomore, Edwards ran for 700 yards and nine scores last season.

South Pike returns eight starters on offense as they averaged over 44 points per game last season. Quarterback Dontavious Turner is a true dual-threat as he threw for 1,293 yards and 20 touchdowns last season while running for another 1,034 yards and 16 scores. He is a Southern Miss commit.

Wide receiver Alex Adams is a 5-foot-11, 185 deep threat who holds offers from Ole Miss, LSU, Arkansas, and Florida State among others. He was committed to Mississippi State earlier this year but decommitted from the Dogs in May.

The Eagles went 11-3 last season and were eliminated by Poplarville in the third round of the 4A playoffs.

One of those three loses for SP was a 33-28 defeat to BHS in week three of last season. In the matchup last year, the teams were tied 12-12 after the first quarter and 20-20 at halftime. South Pike was up one point before the start of the third quarter. In the final 12 minutes BHS was able to score and go up and then stopped a last-minute drive as South Pike scrambled to get a game winning touchdown.

BHS coach Tucker Peavey and his staff will try to keep things simple and manage the game as they are breaking in a first-year starting quarterback in sophomore Dre Ross. Expect the Panthers to try and stay ahead of the chains as they’ll let Ross and senior JQ Edwards run the option out of their spread offense.

Kickoff on King Field is set for 7 p.m.

The new turf at Stone Stadium and Copiah-Lincoln Community College will be the epicenter of area school football this weekend... read more