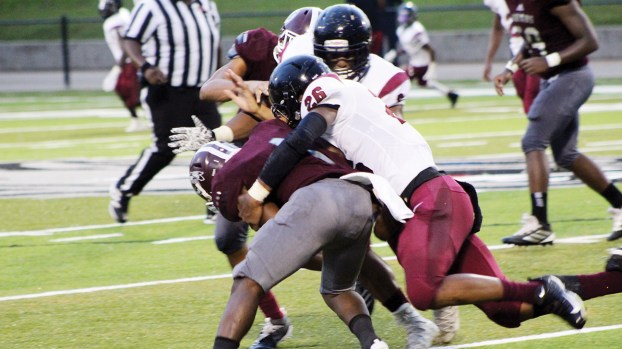 Photo by Cliff Furr Lawrence County senior defensive end Stefan Pierce chases down Hazlehurst quarterback Jahem James for a sack Saturday. Pierce made two sacks in the game as LC held off Hazlehurst 19-18 in the KDMC Kickoff Classic at Co-Lin.

Needing a stop after trailing in the fourth quarter Saturday night, the Lawrence County Cougars forced the Hazlehurst Indians to turn the ball over on downs. LC used that momentum to drive down the field and score what would be the game winning touchdown as they held on for 19-18 win over the Indians in the finale of the KDMC Kickoff Classic hosted by Copiah-Lincoln Community College.

Hazlehurst owned the third quarter as the Indians scored on a 3-yard TD run by Larry Wilson to take an 18-13 lead with 3:42 remaining in the period. Wilson and HHS senior quarterback Jahem James had the Cougar defense on their heels as the speedy 5-foot-6 James and the rugged 5-foot-8 Wilson began to click with their read-option looks.

On the opening drive of the game the Cougar offense fed HHS a steady dose of their senior running back trio — Kylan Cooper, Perez Tyler and Antwan Pittman. Facing a 4th-and-10 just inside midfield, Cooper took a reverse from Pittman and picked up the first down. Later in the drive Cooper scored from the two-yard line on a 4th-and-goal to put LC up 6-0 with 5:34 remaining in the first quarter.

Less than three minutes later LC added another score when Tyler ran in from 10-yards out to put the Cougars up 13-0.

The lone first half score for Hazlehurst came with 6:36 until halftime. James ran in from the three-yard line as he darted around the Cougar defense. Earlier in the drive the Indians picked up 33 yards on a pass from James to senior receiver Ja’quan Copeland.

Leading 13-6, LC got the ball to start the second half, but promptly fumbled to give the ball to Hazlehurst with a. short field. The Indians quickly scored to pull within 13-12.

The Cougar defense held Hazlehurst on their first possession after the TD, but a dropped punt gave the Indians the ball back again with another short field. That set up Wilson’s go-ahead TD late in the third quarter.

With the ball on the LC side of the 50-yard line, HHS chose to go for it on a 4th-and-3 in the fourth quarter. Cougar defensive end Stefan Pierce, a lanky, powerful edge rusher, had been in James face all night. On the fourth down play he tried to run away from Pierce, but the senior chased him down to tackle James from behind and force a turnover on downs.

Pierce finished with seven tackles, three of them for a loss.

After struggling for most of the second half with the Indians getting penetration, the Cougar o-line put together their most physical drive of the game to get the go-ahead score. Cooper scored from the 2-yard line after trading carries with Pittman to get LC to the doorstep of the end zone. The 2-point conversion try was no good and LC led 19-18 with 7:42 remaining in the game.

Cooper carried 23 times for 128 yards and two scores on the night.

HHS didn’t quite as James hit Zyrain Jackson with a 33-yard gain that put the Indians into the Cougar red-zone. Jackson went up with one hand to make the catch as he looked like Odell Beckham making the grab.

The LC defense stiffened though as Pierce and a group of his line mates harassed James into tripping on a 4th-and-3 that ended the Hazlehurst threat. Tyler iced the game with a final first down run that allowed Lawrence County coach Jesse Anderson to put his team in the victory formation.

“We challenged the offensive line during the game,” said Anderson. “We knew we’d have some growing pains with six new guys on the line. To their credit they took the coaching we were giving them, they took me getting on their tails, and they really played for each other when we needed it. Our defense gave us a chance all game long and I’m just glad we were able to get the win.”

Cross-country — which has become one of the most popular sports in the area over the last few years —... read more