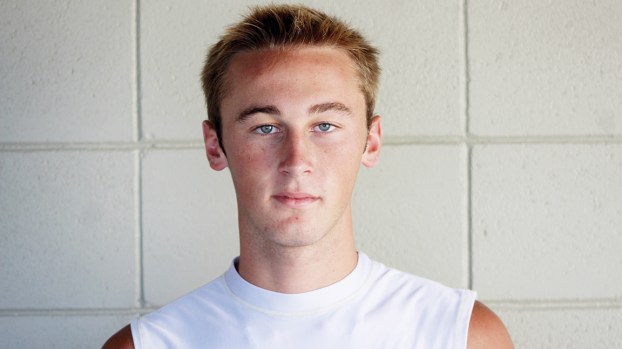 Harrison Brownlee didn’t catch a pass last season for the 9-3 Brookhaven Academy Cougars. He was a defensive back who made 58 tackles, broke up five passes, and recovered two fumbles. During the summer BA coach Ron Rushing predicted a big offensive year for Brownlee, who had been working hard as a receiver.

Thursday night against Sylva-Bay Academy Brownlee made Rushing’s prediction a winner as he caught four passes for 86 yards and the go-ahead score in a 43-31 Cougar win. For his play Brownlee has been selected as The Daily Leader’s Offensive Player of the Week.

Brownlee also ran the ball once on a reverse that picked up 31 yards in the first half. It was one of the few positive early plays for a Cougar offense that struggled in the opening 24 minutes of action.

Sylva-Bay led 31-9 at halftime, but the Cougars had come roaring back to cut the lead to 31-30 by the start of the fourth quarter. That’s when Brownlee made his biggest catch of the game, a 36-yard grab that took him into the middle of the Saint defense before he found the end zone on the first play of the final period.

“I had run a sail route earlier in the game and I noticed the safety pushing hard to the sideline,” said Brownlee. “I came back to the sideline and told coach Rushing that I’d be open on a post and I was.”

Brownlee ran down the hash and then cut into the middle of the field where Cougar quarterback Tyler Fortenberry delivered a pass that hit Brownlee in stride. From there the receiver was able to outrun the Sylva-Bay defenders as BA went up for the first time in a game that they’d trailed 18-0 in the first quarter.

Developing receivers was a goal for Rushing when spring practice started last year. Ninety-one of the 105 catches by BA receivers last season were caught by seniors that have now graduated. That’s why 7-on-7 passing drills and competition was so important for Fortenberry and his receiving group as they attempted to build a rapport.

With the taller Dylan Fortenberry and Rob Johnson lining up on the outside and with Trey Fortenberry as a big target at tight end, Brownlee fits perfectly as a slot receiver who can work the middle of the defense on crossing routes.

It’s a chance that Brownlee has been waiting for since transferring to BA from Loyd Star as a sophomore — an opportunity to get the ball in his hands in the open field and make plays.

“Harrison has stepped up this year on both sides of the ball,” said Rushing. “He plays really fast with a lot of aggression and is really developing into a playmaker on offense.”

As one of only three seniors on the team, Brownlee also has to be a vocal leader. That’s what he was doing early against Sylva-Bay as the Cougars fell behind. Down 12-0 Brownlee was pacing the sideline telling his younger teammates to keep their heads up and to keep fighting.

Ninety minutes later that same sideline was full of jumping, running Cougars as Brownlee headed to the end zone to give BA a lead they’d not surrender.

Psychological relief provided through an open expression of strong emotions. That’s the definition of the adjective cathartic. And that’s the... read more