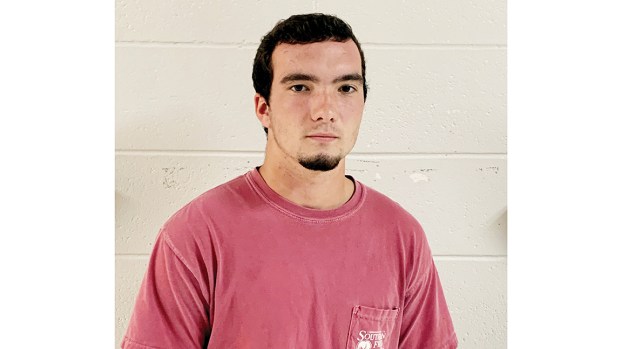 Photo by Mandy Bayless Enterprise linebacker Brodie Harris made four solo tackles, assisted on eight others and recovered a fumble for a touchdown.

The Daily Leader’s Defensive POW Harris saw the ball, took it to the house

Brodie Harris loves playing linebacker. Last season the Enterprise senior was a cornerback, but this year he was moved to middle linebacker by new coach Trey Woodard. On Friday night Harris was part of a Yellow Jacket defense that dominated Salem in 31-8 win. Harris made four solo tackles, assisted on eight more, and returned a fumble for a touchdown. For his stellar play he’s been named The Daily Leader Defensive Player of the Week.

Just before halftime Harris saw his teammate Donavin White run up and jar the ball loose while making a tackle. Harris ran in to scoop it up while staying on his feet. He knew he wanted to score— the problem was the end zone was 77-yards away.

“I just put my head back and ran as hard as I could,” said Harris. “I didn’t want to get caught from behind. They were driving on us at that point, but we kept fighting and forced the turnover.”

Woodard says Harris was checking his rear-view mirror to make sure no one from Salem was going to catch him.

“He turned around and looked behind himself five times before he got to the end zone,” said Woodard. “He didn’t want anyone to sneak up on him. His teammates were blocking behind him to make sure that didn’t happen.”

Salem didn’t score until the game was well in hand. The lone Wildcat TD came with less than four minutes remaining in the fourth quarter. EAC held Salem to 67 yards passing. The Wildcats got only 175 yards on the ground as the Jackets held them to 4.6 yards per carry. The longest carry of the night for a Salem ball-carrier went for 16 yards.

The last time the Jackets held a team to a single score was a 14-6 win over Bogue Chitto in 2016. That was also the last time Enterprise won on the road, a streak they’ll try to break on Friday when they travel to Sebastopol.

The win over Salem was the first victory on the field for Enterprise since they beat the same school in double overtime to open the 2017 season. Harris says that Woodard has instilled high standards for the team, especially the senior leaders.

“Coach Woodard is big on discipline,” said Harris. “He wants everyone to do their job to help the team. It was a good feeling for our hard work to pay off in a win.”

Enterprise dresses around 24-25 players for each game, but Harris is one of the lucky Jackets that doesn’t have to play both ways as he sees action on defense and special teams only.

“Brodie is 145-pounds soaking wet, but he gives everything on every down,” said Woodard. “He shows up every day ready to work and has been a great leader on our team.”

Harris wants to stay in the middle of the action over the next three months of the regular season.

“I really like being in the middle of the action as a linebacker,” said Harris. “I want to be a team leader in tackles and we want to win more games. We’re not done.”

Harrison Brownlee didn’t catch a pass last season for the 9-3 Brookhaven Academy Cougars. He was a defensive back who... read more