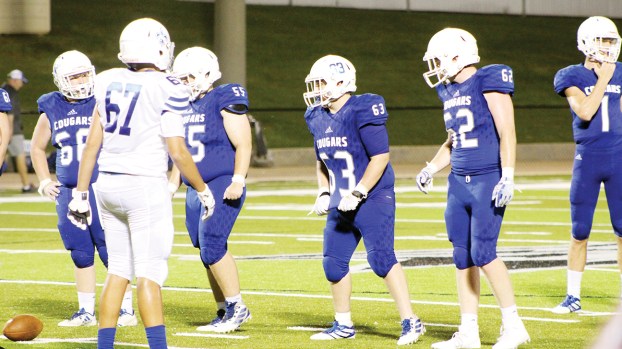 Photo by Cliff Furr Brookhaven Academy pounded Amite School Center 46-7 on Friday in Liberty. The Cougars next play at home against Columbia Academy.

A 7-7 game in the first quarter turned into a rout as the Brookhaven Academy Cougars whipped Amite School Center 46-7 in Liberty Friday night.

The Cougars got on the board via a Nick Ogden TD run, but the Rebels tied the game up on a rushing score of their on with just one minute remaining in the first quarter.

From there it was all Cougars. Corey Case nailed a 32-yard field goal to make the BA lead 10-7 in the second quarter. The Cougars had their way on the ground and in the air with ASC as QB Tyler Fortenberry went 12-of-23 through the air for 226 yards and three scores.

His favorite target was his cousin Dillon Fortenberry who made eight catches for 161 yards and a touchdown. Tyler Fortenberry also ran six times for 62 yards. Ogden ran five times for 53 yards and a pair of scores.

The BA reserves also had a big night as sophomore John Rivers Brown ran four times for 65 yards and a score and freshman Cohen Case had 10 carries for 72 yards.

The Cougars host Columbia Academy next week for their annual Pink Game that honors those affected by cancer.

2nd half drives McLaurin past Hornets

Loyd Star Hornets traveled to Rankin County on Friday night to face off against the McLaurin Tigers. The Tigers used... read more