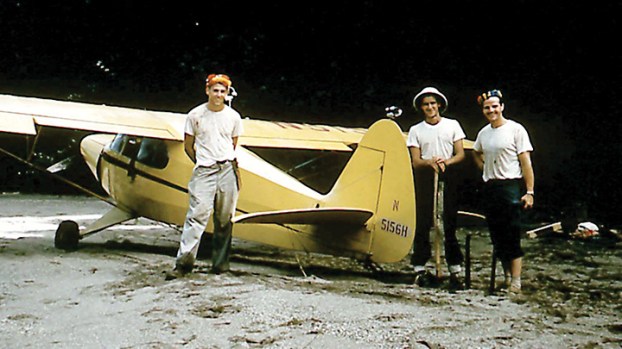 Photo courtesy of Mission Aviation Fellowship Pictured are, from left: Ed McCully, Roger Youderian and Jim Elliot on a beach in Ecuador circa 1955. These men, along with their missionary partners Nate Saint and Pete Fleming, were murdered in January 1956 by a group of natives they were attempting to reach with the gospel.

On Jan. 8, 1956, when Valerie was just 10 months old, her father Jim and four of his friends were murdered on a beach in Ecuador by a group of Huaorani/Waodani warriors.

The fierce men — from the tribe popularly known as Aucas, “savages” — speared the men who refused to fight back. The Christian missionaries hoped even as they died their attackers would understand they were loved. Loved not just by their victims, but by the God in whose name they’d come.

Valerie Elliot Shepard, the only child of Jim and Elisabeth Elliot, was left without a father. So were the children of Roger Youderian, Ed McCully and Nate Saint. The fifth victim, Pete Fleming, though married, was not yet a father.

The events of that January day in the rain forest have been immortalized in numerous books, films, documentaries and websites. For many, the testimony of these men and the families they left behind — some of whom continued to work to reach the Huaroni for Christ — have been the inspiration to become missionaries, to dedicate their lives to following Jesus or to reach out to their neighbors with the gospel.

Shepard grew up seeing her mother share her story through the books she authored. As the wife of a pastor for 43 years, Shepard has played her own role in sharing the love of Christ. When her husband, Walter Shepard, retired in 2018, the couple moved to Long Beach.

A few years ago, Shepard began looking through stored items for her father’s original journals. What she came across instead were at least four years’ worth of correspondence between her parents from the years they courted. She found that each of her parents had written letters to the other that quoted scripture and other books they were reading, that encouraged one another and shared truths with deep wisdom, said Shepard.

When her mother died and she was planning the memorial service, Shepard told her husband, “I can’t carry this legacy.”

“He said, ‘It’s not you that carries it — it’s Christ, and it’s Christ that you are sharing with other people when you share the story.’ So, I hope to carry on the legacy simply by telling the story,” said Shepard.

Shepard contacted a friend with ties to Lincoln County and asked if she could come speak. Renee Hutson, director of Women on Mission for a nine-county area, was tasked with putting together an event to allow Shepard to reach a large audience and allow as many as possible to meet Shepard and hear the story of her parents’ love for one another and for Jesus.

Open to anyone — not just women or any certain church denomination — the time of fellowship and sharing with Shepard at First Baptist is $5 per person for the meal and registration is required. Registration deadline is Monday and interested persons can call the church office at 601-833-5118 or Hutson at 601-748-0705 to register.

The missionaries who lost their lives that day in 1956 had their base at Shell, Ecuador. Shell is now the home of Casa de Fe, a home for abandoned, abused, neglected or disabled children with a goal to love, educate and serve their physical, educational and spiritual needs. The home has more than 60 children on average who are looked after daily at a cost of more than $30,000 each month.

Case de Fe is a ministry close to Shepard’s heart, so Women on Mission asks event attendees to bring a donation of school supplies for the home’s students, as well. A voluntary love offering will also be collected to help cover Shepard’s travel expenses.

For more information, visit www.fbcbrookhaven.org or call the church office.

A member of the Lincoln County NAACP is challenging supervisors to “pay more attention” and put “black qualified people” in... read more