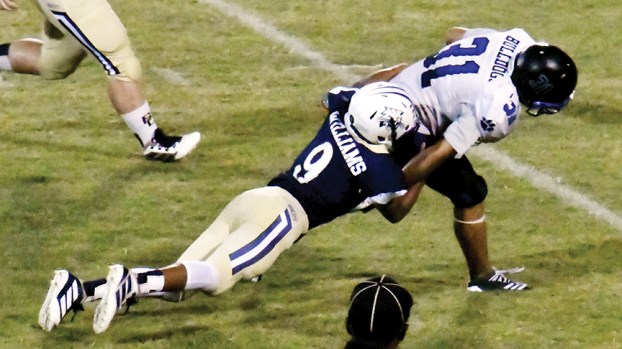 Photos by Stacy Leake Defensive Player of the Week Cameron Williams made 14 tackles for Bogue Chitto against Springfield High Friday night. The freshman defensive back was in on five solo stops as the BC defense shut out the visiting Bulldogs in the second half.

Early on, it looked like Bogue Chitto and Springfield High (Louisiana) were going to have a shootout Friday night on Troy Smith Field. The Bobcats led 10-0, 17-7 and 23-14 in the opening two quarters. At halftime their lead was 23-20 over the visiting Bulldogs from Livingston Parish.

That would end up as the final score though as the Bobcat defense buckled down and held SHS scoreless in the second half. Freshman defensive back Cameron Williams chased, harassed and wrapped up Bulldogs all night for the BC defense. For his 14 tackle effort Williams has been named The Daily Leader Defensive Player of the Week.

When the Bobcat defense is at their best, they’re gang tackling. The boys from Bogue Chitto don’t have a future NFL prospect at nose tackle or any 6-foot-2 linebackers like a larger school might have. What coach Gareth Sartin has is a scrappy bunch that play like Bobcats should.

The Bobcat faithful have several talented photographers amongst their numbers that shoot the game from the sidelines or bleachers each Friday night. If you look back through their pics from the Springfield game, you’ll see Williams — more often than not — with a fistful of Bulldog jersey or his arms locked around the legs of a SHS runner.

Sartin has been impressed with the play of his young cornerback in 2019.

“Cameron is a good kid that always has a smile on his face and is always joking around with his teammates,” said Sartin. “He’s been starting for us at corner this season and has been one of our tap tacklers on defense this season.”

Williams was in on five solo tackles and assisted on nine more as the BC defense got stop after stop in the second half to turn back the Springfield threat. Williams had one tackle for a loss on the night. Sophomore Colton Bales added 11 tackles for the Bobcat D. Bales also recovered a fumble and made a sack. J.T. McCaffrey had nine tackles including two for a loss.

The win wasn’t secured until the final moments of the game when junior Tristan Buffington picked off a Springfield pass to clinch the win and the second-half shutout.

Williams and his mates will get plenty of opportunities to make tackles this Friday when the Bobcats host the Mize Bulldogs. Mize and first year coach Chuck Lee are 3-0 after gutting out a tough 14-12 win over Wesson last week.

The Bulldogs are averaging just under 300 yards rushing per game as they like to pound the ball behind a large offensive line.

That being said, don’t expect Sartin, Williams or any of the other scrappy Bobcats to back down from the challenge.

Friday night at Sacred Heart, the West Lincoln rushing attack was like one of those big rollers you pass on... read more