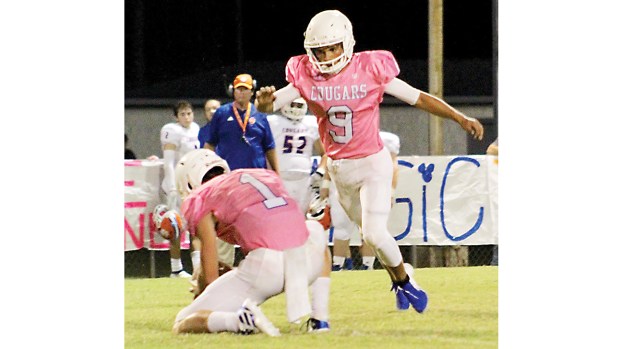 Photo by Katie Furr Sophomore kicker Corey Case boots a ball against Columbia Academy last week. Case and the Brookhaven Academy Cougars are in Centreville Friday night to take on the Tigers. A 19-yard field goal by Case in the final minute pushed BA past Centreville Academy last season.

BA Cougars on the road to Centreville Friday night

Brookhaven Academy (2-1) will look to bounce back from a close 44-42 loss to Columbia Academy last week when they take on former district rivals Centreville Friday night.

Centreville Academy (1-2) is led by longtime head coach Bill Hurst and the Tigers are off to a rare rough start. The Tigers beat the New Orleans Home School Saints to open the season before losing 14-12 to Bowling Green in week two.

Last week Centreville went up 6-0 on Silliman before going cold offensively in a 36-6 loss.

A chilly offense was not a problem for BA last week as sophomore quarterback Tyler Fortenberry was responsible for a combined 500 yards just himself against Columbia. Fortenberry ran for 141 yards and two scores including a long of 47 yards. Through the air he finished 26-of-43 for three scores and two interceptions.

Linebackers Trenton Tarver and Nick Ogden led the BA defense in tackles as each got 11 stops apiece. Columbia was balanced as they gained 221 yards on the ground and 220 yards via the pass.

Centreville and BA are longtime rivals that usually find themselves in the same district. That’s not the case this season though as the Tigers are members of the new MAIS 3A while the Cougars are a 4A school now.

Last season Brookhaven Academy clinched a district title with a close 23-22 win over Centreville at home when kicker Corey Case booted a last-minute field goal to win the game.

Hurst is the winningest high school coach in state history (currently 401-121) and has won nine titles in his time at CA.

Kickoff in Centreville is set for 7 p.m.

The Wesson Cobras are back in the friendly confines of Stone Stadium for a second straight week as they entertain... read more