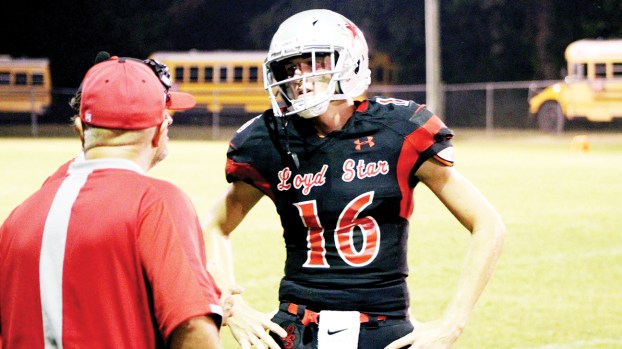 Photo by Cliff Furr Loyd Star senior quarterback Stephen Mills and the Hornets are on the road tonight in Attala County as they face the McAdams Bulldogs. LS has one final non-region game next week against Mize before they star division play versus Enterprise.

Here’s a look at who and where the four Lincoln County schools will be playing Friday night.

The Bobcats (2-2) are headed to Rankin County Friday night to face the Puckett Wolves (2-2). As the welcome sign so infamously says, Puckett is home to 300 good friendly folks and a few old sore heads.

The town is also home to one of the most tradition rich small-school football programs in the state. The Wolves are coming off of a 60-57 win over West Lincoln.

Bogue Chitto was beaten last week at home by Mize, but the Bobcats and coach Gareth Sartin have been short-handed as various players work back from injuries. Quarterback Shaw King, lineman Mac McKinney, and running back Owen Anderson were all out against Mize.

Kickoff at Puckett is set for 7 p.m.

Coach Brad Bland and his Bears (2-2) will head up I-55 to Madison for a matchup Friday night against the St. Joseph Catholic Bruins.

St. Joe (1-3) is in its second year of being led by former Mississippi State quarterback John Bond. They Bruins finished 6-7 last season and beat Bogue Chitto 38-21 in the first round of the playoffs.

The Bruins began their season with a long trip to St. Stanislaus where they lost 46-0. They were then beaten 18-14 by Cathedral and 22-21 by Richland. They got their first win last week when they beat St. Andrew’s 28-7 on the road.

In the wild shootout loss to Puckett last week WL sophomore running back Enrico Price carried the ball 14 times for a season high 178 yards. Price scored one rushing TD. His brother, senior Michael Brothern, ran for 157 yards on 17 carries and found the end zone five times. Brothern has a team high 10 rushing sores on the season. Senior quarterback Travis Hall also went over 100 yards rushing as he carried 13 times for 115 yards and a pair of touchdowns.

Kickoff on the campus of St. Joseph is scheduled for 7 p.m.

After playing their home opener last week the Loyd Star Hornets (1-3) are back on the road Friday night as they travel to Attala County to take on the McAdams Bulldogs. The trip for those traveling will take close to two hours as 130 miles separates Loyd Star and McAdams, which sits southwest of Kosciusko on Hwy. 12.

The 1A Bulldogs are coached by Kenneth Nelson. McAdams lost 20-0 to both Leake County and J.Z. George in the first two weeks of the season. They then suffered a close 12-8 defeat to West Lowndes before getting their first win last week with a 34-7 whipping of Ethel.

Kickoff in McAdams is at 7 p.m.

The Jackets (1-3) and coach Trey Woodard are the only county team playing at home Friday night as they’ll host the St. Patrick Fighting Irish from Biloxi.

Enterprise senior running back Dylan Vaughn is at 357 yards rushing through four games. He’s averaging 5.7 yards per carry and has scored twice for the Jackets.

Kickoff on Harry Cole Field is set for 7 p.m.

The Wesson Cobras make the short drive up Hwy. 51 Friday night to face the Hazlehurst Indians in an all Copiah County... read more