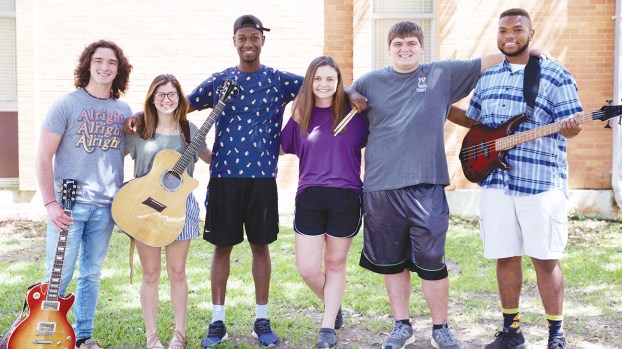 It’s a recruitment tool for Copiah-Lincoln Community College. It’s an opportunity. It is also, according to its members, a whole lot of fun.

The Sojourners is Co-Lin’s resident rock band. It’s been around in one form or another for decades, evolving with the times. Every year, auditions are held and band members are offered a half-tuition scholarship.

“One cool thing I’ve discovered about this group is the wide range of what they’ve done musically,” Assistant Band Director Chad Austin said. “You have a wide range of musical talents.”

Drummer Gregory Henderson said he comes from a family with a lot of enthusiasm for music. That love of music is what drew him to audition for the Sojourners.

“I joined because I really love music,” Henderson said. “Especially with this group of guys. It makes it fun.”

And it’s the fun and energy of a live performance that the Sojourners work to bring to their audience.

“It’s like an electric pulse going through all of us,” singer Victoria Sitting said. “When it all comes together, it’s just so much fun. I wish everyone could be a part of it. It’s awesome.”

Austin said the band tries to include a variety of musical genres so there is something for everyone. Being accessible to a variety of audiences is an important part of the band’s role as a recruitment tool for the school. That role is something the student members are very aware of.

“We like to be ambassadors for the college,” Austin said. “When someone’s here at Sojourners, it’s bigger than us. It’s Co-Lin. We want to always think about that when we go out.”

Aptiv, which operates a plant in Brookhaven, is partnering with Hyundai to create a $4 billion autonomous driving joint venture.... read more