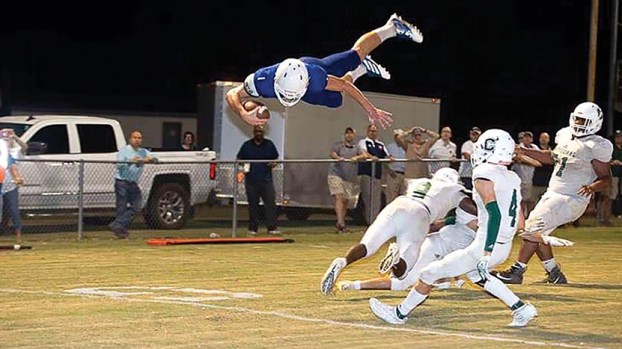 Who else? BA’s Fortenberry is Offensive Player of the Week

By now you’ve likely seen video or picture of “the play” from Brookhaven Academy’s 34-33 win over Cathedral Friday night.

The film shot from the BA press box has been shared on social media by accounts such as MaxPreps and is in the running for top play of the week by USA Today.

The photo is even more stunning. The player looks to be flying. Sailing what looks like 10-feet off the ground as he’s reached the apex of his journey — about to start making his descent.

In the least surprising selection of the year, Brookhaven Academy sophomore quarterback Tyler Fortenberry, he who took flight to beat Cathedral, has been picked as The Daily Leader Offensive Player of the Week.

Fortenberry went 22-of-34 passing for 337 yards in the win. He tossed two touchdowns, both to his cousin Dylan. On the ground he ran 10 times for 37 yards and the one score against the Green Wave.

That one rushing touchdown was what generated all the buzz via pictures and video as Fortenberry leapt over a pair of closing Cathedral defenders and somersaulted into the end zone with no time remaining to give his team the win.

On the season Fortenberry has gone 89-of-155 through the air for 1,272 yards, 12 touchdowns and nine interceptions. He averages 254 passing yards per game. When he’s running the ball, he averages just over seven yards per carry. He’s rushed 66 times for 480 yards and five scores.

The final drive towards the game winner was a wild one and you’ll have to forgive the reporter covering it in live time if his story on the deadline had any mistakes. In the words of BA coach Ron Rushing, “it happened so fast.”

With the ball on the BA 35-yard line, Tyler found Dylan for a long pass that moved the chains to the Cathedral 46. As excited as the BA sideline and fans were, the clock was the enemy and trailing 33-28, the Cougars couldn’t be content with just getting into field goal range for a Corey Case kick — it was touchdown or nothing.

The next Cougar completion was the one that set up the game winner. Scrambling to his left, which is an unnatural throwing motion for a right-handed QB, he heaved the ball 50-yards in the air to senior receiver Harrison Brownlee.

Like a power forward blocking out underneath the basket for a rebound, Brownlee stepped in front of the defender and timed his jump perfect to pull the pass in. Brownlee went down hard and came up cradling his arm but stayed in as just 12 seconds remained in the game.

Credit to the BA offensive line for running down to get in position so that Fortenberry could spike the ball as soon as the officials set it for play on the 5-yard line.

On second down Tyler looked right for a fade to Dylan in the corner, a play that had worked earlier, but the Green Wave defense was ready and batted the ball away. Third down saw Fortenberry look left and sling a pass to an open Rob Johnson on a quick hitter in the end zone, but the ball went through Johnson’s hands and the Cougars were down to one final shot at winning the game with four seconds remaining.

If you’ve seen the tape, then you know what happens next. Cathedral slides a safety over to take Dylan away in the corner while Brownlee gets jammed on a route across the middle by a linebacker. A Cathedral defensive end gets his hands on Fortenberry at the 13-yard line and does everything but make the game ending sack. Had he grabbed with two hands, the game would be over, and this article would never have been written.

The 6-foot-4 Fortenberry is elusive though, and he shirks away from the would-be tackler. The most terrifying thing that Fortenberry does at times as a young QB is hold the ball away from his body while he’s running.

On this play though it served him well, as he pump-faked towards Dylan while running towards the end zone, still holding the ball far away from his body, still 10-yard away from scoring.

It was at that point that Fortenberry decided to use his feet to win the game. He took two big strides past the line of scrimmage, put his feet side-by-side to lift off, leaned his head and torso out towards the goal line and leapt.

Down, set — Hutt of Cobras is Defensive Player of the Week

With their backs against the wall Friday night at Hazlehurst, the Wesson Cobra defense knew they’d need to keep the... read more