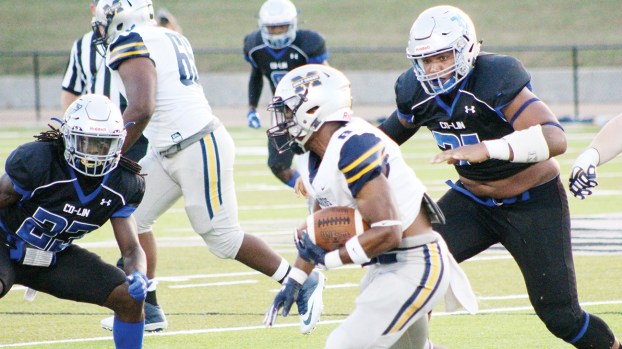 No. 4 Gulf Coast too much for the Wolves

The first Mississippi Gulf Coast touchdown of the night was indicative of how things would go for Copiah-Lincoln in their Thursday night MACJC matchup.

Gulf Coast wide receiver Marquise Bridge was all alone behind the Co-Lin defense and walked into the end zone after a 48-yard pass from quarterback Chance Lovertich. The No. 4 Bulldogs were better in all three phases of the game Thursday as they cruised to a 38-20 win over the No. 11 Wolves in Stone Stadium.

A 75-yard interception return down the Gulf Coast sideline by Jackie Matthews put coach Jack Wright and his team up 24-0 with just over six minutes remaining until halftime.

Co-Lin got on the board with a 52-yard interception return for a score by sophomore Jalen Ware. The Wolves had chances to cut the lead to 10 in the first half and they received the second half kickoff, but turnovers plagued the C-L offense as they committed three in the first half and trailed 24-7 at the half.

The Gulf Coast defense is coached by former Co-Lin coordinator Brett Shufelt and former C-L assistant Clarence McDougal is also a GC defensive assistant. The Bulldogs used middle blitzes and pressure from their ends to give the Co-Lin offensive line problems all night. Co-Lin quarterback Danny Clark finished 14-of-36 passing for 156 yards.

Deondre House led the Gulf Coast rushing attack with 97 yards as the Bulldogs ran for 202 yards as a team.

Co-Lin netted out 106 yards on the ground. The Wolves were 2-of-11 on third down conversions and had seven penalties for 75 yards.

Gulf Coast (5-0) moves to 2-0 in the division and is the lone unbeaten team in the state after No. 3 Northwest was upset 47-41 by Holmes Thursday night. Co-Lin (3-2) still controls their destiny but will need to win out to make the playoffs.

Gulf Coast beat Jones 20-14 last week and still has road games at East Central and Hinds. Co-Lin will look to snap their two-game losing streak when they host East Central (3-2) next week. The Wolves will then play at Hinds before hosting Jones in a homecoming game that will likely decide second place in the division.