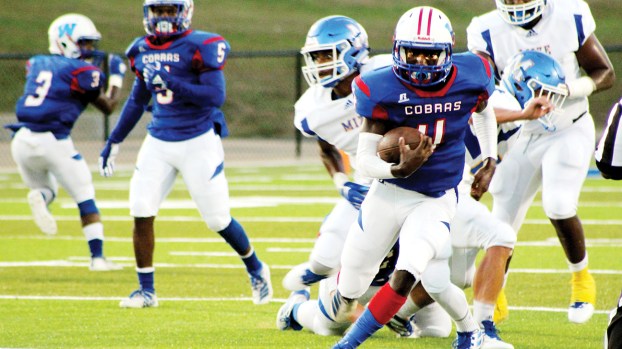 Photo by Cliff Furr Wesson junior Antrelle Sims is a scoring threat West Lincoln must account for tonight in their region matchup. Sims has gained nearly 1,000 yards through six games either running, catching, or passing the football.

Might as well play the big one first. The two most experienced teams in Region 7-2A — Wesson and West Lincoln — meet up Friday night in Flea Hop on Perry Miller Field in a big showdown.

Coach Jeremy Loy and his Cobras (2-4) are playing their first 2A region game after spending the last six seasons as one of the smallest 3A teams in the state.

West Lincoln (3-3) is coming off of two straight playoff appearances and has one of the most experienced rosters in the region for coach Brad Bland.

The Bears are coming off a 26-20 win over St. Andrews while Wesson lost 57-30 last week at Lawrence County.

The key to the game for the Wesson defense will be limiting the big plays that come out of the West Lincoln running game. When the Bears score it usually comes on a long run by backs Enrico Price, Travis Hall or Michael Brothern.

The West Lincoln defense will have to key in on slowing down an emerging Wesson passing game that has come to maturity since freshman Will Loy was moved to the starter role.

Junior Antrelle Sims has been dynamic everywhere he lines for the Cobras. He’s rushed for 304 yards, passed for 177 yards and hauled in 427 receiving yards. Sims has scored a combined eight touchdowns.

For the Bears Brothern has scored a whopping 13 touchdowns while running for 660 yards in just five games.

BHS back in Jones County to face Laurel

It’ll be another trip down 84 East for the Ole Brook faithful as Brookhaven High is headed to Jones County... read more