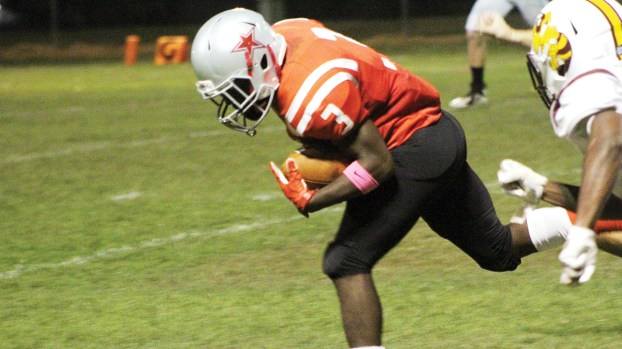 In a game with just two punts it was a special teams play that ended up being the catalyst that drove Loyd Star (2-5) to a 37-13 win over Enterprise (1-6) Friday night in the Sting Bowl.

With 4:11 remaining until halftime Enterprise senior running back Dylan Vaughn scored on a 5-yard run to put the visiting Jackets up 13-8.

EAC had scored on their first two drives of the night and eaten up a ton of clock doing it. On their first possession of the game the Jackets used a combination of Lawson Chemin throwing and passing the ball along with Vaughn and junior speedster Edrick McCray running to march down the field.

That drive culminated with a 3-yard Vaughn TD run and after his second score it appeared that the Jackets had all the momentum just before half.

All that changed in 13 seconds as sophomore Versie Wilson reached down and grabbed the ensuing kickoff from the W.E. “Sambo” Smith turf and raced down the home sideline untouched for a score.

The Payne Walker point-after kick was good, and Loyd Star had jumped back ahead 15-13 as momentum was now wearing the black and red of the Hornets.

Enterprise tried to pass the ball down the field just before half but an interception by Loyd Star junior Thomas Kelly stopped that drive.

A pass to Kelly from senior quarterback Stephen Mills had moved Loyd Star to within striking distance on their first scoring drive of the night. Wilson scored on a 9-yard run and after an offsides called moved the ball closer, Wilson dove in for the 2-point conversion that put Loyd Star ahead 8-7 early in the second quarter.

Holding a two-point lead and getting the ball coming out of the break, LS coach Brian Ford encouraged his team to be the hammer, not the nail, in the early going of the second half.

On their first drive Mills connected with Payne Walker on a 40-yard pass to the Enterprise 7-yard line. Walker caught the pass over his shoulder and was able to stab a foot in bounds to seal the big play. The catch came on a 3rd-and-30 when it appeared the Jackets might force a punt.

Wilson did the rest as he scored from the three-yard line to put LS up 22-13 with 9:21 remaining in the game.

The Jackets had success moving the ball all night but never scored again after the early Vaughn TDs. Impressive gains would come back on penalties of holding or block in the back. EAC head coach Trey Woodard knows his team is improving but knows at times they stopped themselves with penalties.

“The kids played hard and worked their tails off. We just had some self-inflicted mistakes tonight that really hurt us,” said Woodard. “Injuries have also hurt us with not getting the time it takes to develop some key positions in practice.”

The Jackets have the smallest roster in the county with 25 players listed. Friday night four players were on the sideline in street clothes, two with arms in slings. Two of those missing players are seniors and three-year starters in linebacker/running back Jordan Stephens and lineman Nick McGee.

Loyd Star has seen its own share of injuries to their young team this season. Early on against Enterprise junior running back Eric Birch went down with an ankle injury. It’s the same ailment that’s limited him for most of the season already.

On the first play of the fourth quarter Loyd Star put the game away on another short Wilson TD run. Wilson would also add another long scoring run late in the quarter when the game was already in hand.

Loyd Star coach Brian Ford knew that Wilson would have the opportunity to break a big kickoff return if things lined up for the sophomore.

“That was the spark we needed,” said Ford. “We’d told him during the week after watching film that it might be there. He did a great job of staying in bounds and following his blocks.”

Wilson running the ball was the payoff all night for Loyd Star, but the Hornets passing game behind the play of Mills was better than it’s been all season. Julius Smith, Wilson, Kelly, and Jontorion Smith all had success catching the ball from Mills.

“We won’t to be able to mix things up and throw the ball more, but with such a young team, that’s taken time,” said Ford. “Our receiver concepts have been getting better and I think we showed that tonight and hopefully that will continue.”

The Loyd Star homecoming crowd left happy with the win and Ford huddled in the center of a pumped-up swarm of Hornets as LS starts Region 7-2A play with a 1-0 record.

On the other side of the field Woodard stood over his kneeling players and preached a message of perseverance.

“Nothing’s over,” said Woodard. “We’ve just got to keep playing, keep working, and keep getting better. I’ve got a great group of kids and they’re with us, they’re bought in.”

When the season started for coach Jeremy Loy and his Wesson Cobras junior Antrelle Sims was the starting quarterback and... read more