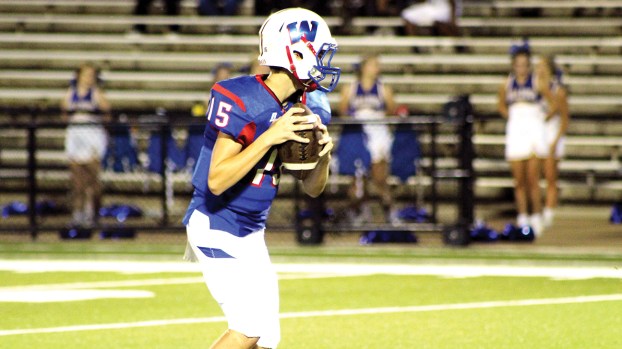 Photo by Cliff Furr Wesson freshman quarterback Will Loy is The Daily Leader Offensive Player of the Week after throwing for 257 yards and four scores in a 48-7 region win over West Lincoln.

The first thing you notice is the touch that Will Loy puts on his passes. It’s a feel for the ball that’s been honed by countless hours of throwing sessions with his daddy, brother and sister in the front yard. When he needs to throw it hard, he can, but Loy is at his best when he’s quickly flicking a pass out of his hands — a quick throw to the flats or fitting it in a tight window on a slant.

Only a freshman, Loy is putting that feel to good use every week for the Wesson Cobras (3-4). On Friday he was masterful in a 48-7 Region 7-2A win over West Lincoln. The baby-faced signal caller finished 14-of-20 for 257 yards and four touchdowns. For his outstanding performance he’s been named The Daily Leader Offensive Player of the Week.

It was the first region game for the Cobras as a member of the 2A classification after being one of the smallest 3A teams in the state for the last six seasons. It was also just the fourth start in the career of young Loy and the Cobras are 3-1 in those games.

Loy is the son of Wesson head coach Jeremy Loy and was the QB for a very good Wesson junior high team last season. The plan all along was for him to see some situational work throwing the ball as a freshman, but he’s skinny, still growing and his daddy didn’t want to throw him to the wolves too soon.

In a cameo against Mize he went three-of-three for 64 yards and a score. The previous week against Sumrall he had thrown for 147 yards on 19 attempts in a loss.

Against Hazlehurst Loy threw a season high 32 passes for 228 yards and three scores as the Cobras fought for a comeback 28-21 win over the Indians — the first in school history.

One thing that’s made Loy’s ascent possible has been an embarrassment of riches in the Wesson skill positions. Sims, a junior, has moved back to wide receiver after playing last season at quarterback. When a ball is up for a 50/50 battle between the DB and him — most times it will be Sims is going to come down with it.

Against West Lincoln Sims caught six passes for 148 yards and two scores. For the season he’s caught 30 passes for 575 yards and five touchdowns. Fellow junior Anterio Miller is second on the team with 232 yards on twelve catches. Five different Cobras have caught a touchdown pass thus far in 2019.

A young Cobra offensive line has come together as the season has progressed and junior Orlando Smith has rushed for a team high seven touchdowns while gaining 420 yards thus far this season to further bolster the WAC offense.

Wesson and the Loy led air-raid are at home Friday night as they host Bogue Chitto in another highly anticipated Region 7-2A matchup.