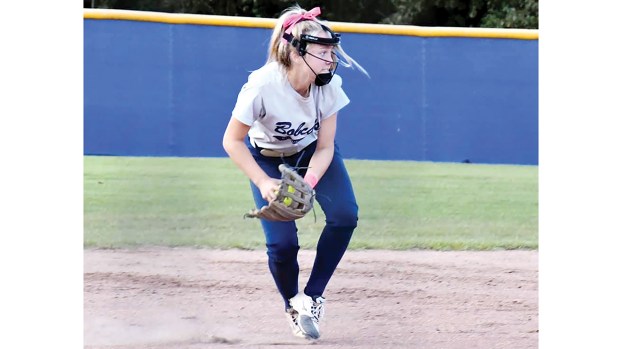 Photo by Stacy Leake Senior Julie Anna Bartram collects a ground ball and prepares to throw to first Tuesday for Bogue Chitto. The Lady Bobcats swept Union with a 2-0 series win and now move on to face Southeast Lauderdale tonight on the road in the third round of the MHSAA slow-pitch playoffs.

Lady Bobcats on to 3rd round after sweeping Union

The Bogue Chitto Lady Bobcats (18-7) stayed unbeaten in the MHSAA Class I slow-pitch playoffs with a sweep of the Union High Lady Yellow Jackets Tuesday.

Coach Kris Smith and his team will be on the road today in the semifinals of south state as they play at Southeast Lauderdale in Meridian.

In a 10-0 win in game one Tuesday, the Lady Cats outhit Union 10-1 and used a seven run second inning to take control.

BC didn’t have an extra base hit in the game as they piled up singles to push runs across the plate. Julianna Frazier had a team high three RBIs for Bogue Chitto. Kaitlin Poole had two hits while Frazier, Lynsey Cooper, Julie Anna Bartram, Alece Nettles, Kylie Chapman, Gracie Guynes, Shyann Jackson and Kayci Beth Wallace had one hit each.

Guynes was the winning pitcher in both games.

Poole hit a double for BC in game two while Bartram drove in a team high two RBIs. Codi Leggett led the offense with three hits while Cooper, Chapman, and Jackson smacked two apiece.

The three-game series with Southeast Lauderdale will begin at 5 p.m. today.

In the other south state semifinal, Lake is traveling to Ethel. The north and south state championships will both take place on Tuesday.

Lawrence County rolls into the third round