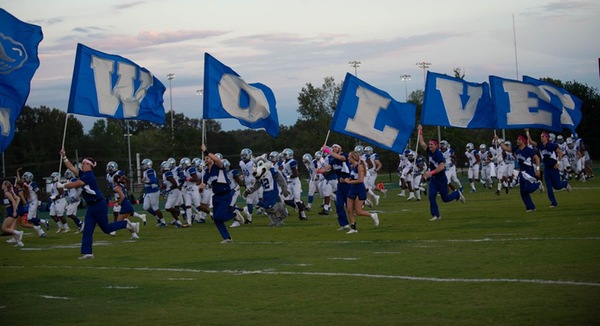 Photo by Co-Lin Sports Information The Copiah-Lincoln Community College Wolves will celebrate homecoming Saturday with ceremonies at 2:30 p.m., and will host the No. 10 Jones College Bobcats with a 3 p.m. kickoff.

No. 10 Jones travels to Co-Lin for homecoming

The Wolves of Copiah-Lincoln Community College are looking for an MACJC South Division win this Saturday as the No. 10 Jones College Bobcats come into H.L. Stone Stadium for a homecoming matchup.

Co-Lin enters the game 3-4 overall and 1-3 in division play after falling to No. 6 Hinds last week 35-21. The Bobcats come into the game 5-2 overall, and 3-1 in division play on a three-game win streak, most recently a 35-3 rout over Northeast Mississippi. Kickoff for the homecoming game is slated for 3 p.m. with the homecoming presentation taking place before the game at 2:30 p.m. Saturday’s game will also serve as sophomore day as it is the final home game of the 2019 season.

Despite the loss last week, Co-Lin had several notable performances. Danny Clark led the Wolves from the quarterback position with 281 yards on 20-of-32 passing. The lefty posted two scores and no picks on the night. Clark spread the ball to seven different receivers, but Malik Heath led the way with 74 yards on four catches. Antoine Robinson continued his great season with five catches for 70 yards and one score.

Dawson Brown and Erick Rogers also had great outings with five 55 and 53 yards each, respectively. Natrone Brooks, Jalen Campbell, and Lawilliam Holmes led the Wolves’ defensive efforts. Brooks posted seven tackles, half a tackle for loss, and one fumble recovery, while Campbell posted seven tackles and one tackle for loss. Holmes finished the night with six tackles and one sack.

The Wolves have relied heavily on the passing game this year as Co-Lin is currently 17th in the nation in passing yards with 1,564 yards through the air. The team also ranks in the top 20 in passing yards per completion with each one averaging 14.5 yards. The Bobcats have a different approach as the team ranks in the top 15 nationally in nearly every rushing statistic. Jones has 1,363 rushing yards to just 1,179 passing.

Defensively, the Wolves continue to have good numbers as the team is 20th in the country surrendering just 283.6 yards per game, with 151.6 of those coming from the rushing attack. Jones ranks 7th giving up just 235.3 yards per game including just 118 passing yards per game.

He’s back — JQ Edwards is Offensive Player of the Week

In a senior season in which Brookhaven High running back JQ Edwards has battled injuries that’ve forced him to miss... read more