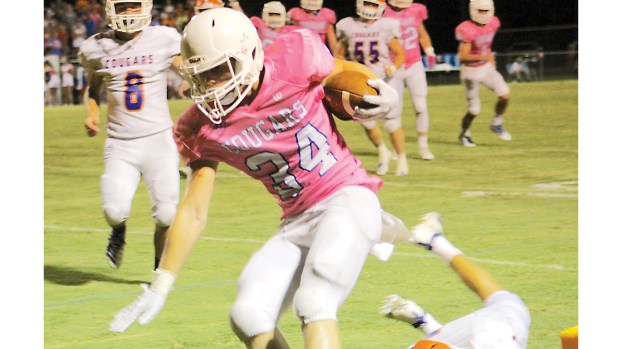 Daily Leader file photo The Brookhaven Academy Cougars will most likely lock up a home playoff game next week with a win tonight at River Oaks School. The top four MAIS 4A teams will get a first round bye when the playoffs start and the Cougars currently sit in sixth place in the rankings.

The Brookhaven Academy Cougars (5-4, 2-1) will head in a western direction tonight to see the sights and take in the strong smells that await them 150 miles away in Monroe, Louisiana. BA wraps up their regular season tonight with a district matchup against River Oaks School (2-7, 0-3).

The two teams met in the MAIS playoffs last season with BA taking a 28-6 win at home in the quarterfinals. Tonight, the Cougars and coach Ron Rushing will be heavy favorites as ROS is having a down season, with just 22 players listed on the team’s roster.

Last week against Hillcrest, the Cougars rolled to a 41-14 win after falling behind 6-0 on a long Hillcrest run in the first quarter.

Senior Nick Ogden carried the ball 14 times for 203 yards and three scores to lead the BA offense. Ogden had a 70-yard run for a TD and averaged over 14 yards per carry. Sophomore John Rivers Brown added 88 yards rushing and one touchdown on just five carries. Junior Luke Johnston rushed nine times for 52 yards and one TD. Senior Gunar Brister carried twice for 31 yards and a single score.

BA only attempted three passes in the game with Harrison Brownlee making the lone catch for nine yards.

Trenton Tarver led the Cougar defense with 6.5 tackles including a sack. Ogden made six tackles and Brister added 4.5 for the Cougars.

Kickoff in Monroe is set for 7 p.m.

Co-Lin closes out season against Southwest

The Wolves of Copiah-Lincoln Community College will attempt to finish out the 2019 season on a high note Saturday as... read more