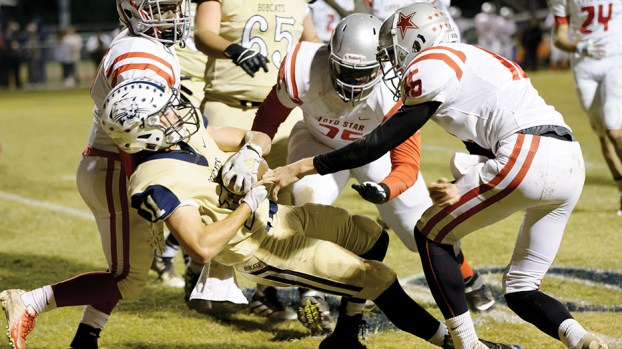 Photo by Teresa Allred Bogue Chitto junior running back Owen Anderson goes down in a crowd of Loyd Star defenders Friday night. Anderson scored three rushing touchdowns as the Bobcats took back the Possum Bowl trophy with a 55-22 win over their region rivals from Loyd Star.

The Possum Bowl trophy returns to its perch in the Bogue Chitto field house after the Bobcats (5-6, 3-2) took down county and region rivals Loyd Star (2-9, 1-4) 55-22 Friday night on Troy Smith Field.

Loyd Star jumped up early on a 77-yard scoring run by sophomore Versie Wilson. The Bobcats came back to take a 13-8 lead only to see the Hornets go ahead 14-13 when Jontorion Smith of Loyd Star ran a kickoff back for a 70-yard score.

BC added two more first half scores to lead 27-14 at halftime. Senior Bobcat quarterback Shaw King, one of four seniors playing their last regular season game on Smith Field, ran for one touchdown and passed for two more to leads the Bobcats. King carried 11 times for 109 yards.

Eric Birch scored the second half TD for the Hornets on the ground. Senior quarterback Stephen Mills finished 6-of-14 for 48 yards as the Hornets posted 213 yards of total offense in the loss.

Junior running back Owen Anderson scored three rushing TDs for the Bobcats as he gained 150 yards on 10 carries. BC fullback Reid Smith carried 10 times for 60 yards and one score. Junior offensive lineman Mac McKinney also picked up a rushing TD.

Carson Price was 5-of-6 on PAT attempts for BC as the Bobcats piled up 420 yards of total offense and completed a sweep of their county competition.

The Bobcats finish as the third-place team in Region 7-2A and will travel to face the Perry Central Bulldogs (5-5) next Friday in New Augusta. Perry Central took second place in Region 8-2A Friday night with a 20-8 win over North Forrest.

Cougars cruise past Kirk into round 2

The Brookhaven Academy Cougars (7-4) got a 62-yard scoring pass on the first play of the game and never looked... read more