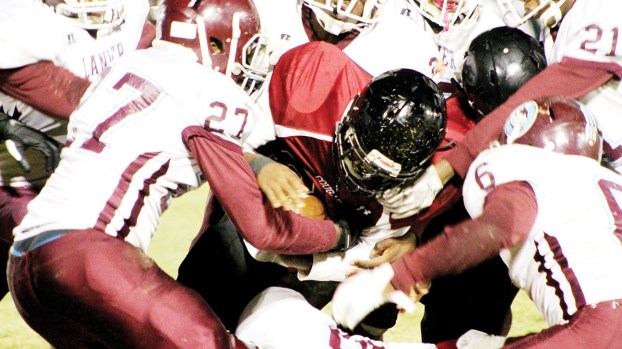 Photo by Cliff Furr Lanier defenders converge on Lawrence County running back Perez Tyler Friday night in Monticello. With the loss Lawrence County finishes third in their division and travels to Simpson County on Friday to play Mendenhall.

The victory by Lanier gave the Bulldogs second place in Region 6-4A and a home playoff game on Friday. Lanier will host Newton County while Lawrence County must travel to play Mendenhall.

A 43-yard pass from Lanier quart back Ladarius Mayes-Peals to sophomore Christopher Jones put the visitor from Jackson up 8-0 in the first quarter. Jones got behind four LC defenders to catch the pass in stride and score.

A fumble on the LC 1-yard line stopped another Lanier touchdown on the following drive.

Punting from their own end zone on the following drive, the Cougars could only get the ball out to their 11-yard line as the snap almost went over the punters head and the kick was nearly blocked.

A Mayes-Peals QB sneak from three yards out put Lanier up 14-0.

The final Lanier score came with two minutes remaining until halftime when Kobe Benson scored from 11-yards out. The Bulldogs converted a 3rd-and-15 earlier on the drive with a 30-yad pass to Jones.

Wesson is the Region 7-2A champ and will enter the playoffs next week as the top seed. Everything else is... read more