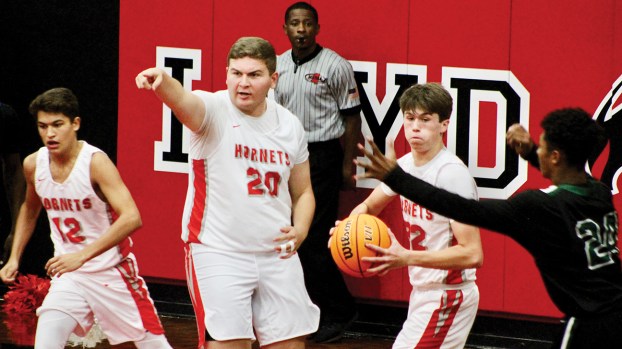 Photo by Cliff Furr Loyd Star junior forward Lawson Smith grabs a rebound as his teammate Peyton Morse directs him towards an open teammate Tuesday night against McLaurin. The Hornets travel to Rankin County tonight to face the Pisgah Dragons.

Every team wearing red and white has had to figure out how they’ll replace the points, runs or touchdowns missing from that nucleus of now graduates.

For Loyd Star basketball coach Seth Britt the focus this season is leaning on his senior guards Stephen Mills and Reese DeHart as they handle the ball and allow their younger teammates to grow.

Tuesday night in the season opener against McLaurin the duo were two steady hands in a 65-49 wire-to-wire Loyd Star win.

DeHart knocked down long jumpers and helped handle the McLaurin pressure on his way to scoring a game high 21 points. Fresh off playing quarterback for the Hornet football team — Mills worked at the point and chipped in 13 points while grabbing 10 rebounds and handing out five assists.

“We did a pretty good job of controlling the pace of the game tonight,” said DeHart. “That’s going to be important for us this season.”

The pair were joined in the starting lineup by senior center Peyton Morse who gives the team their best inside presence. Morse was somewhat limited by a broken finger on his non-shooting hand Tuesday night. Morse scored two points and grabbed three rebounds.

Both players brought great energy and hustle as Calcote scored the first five points of the game to put LS up 5-0. A DeHart layup off a turnover put the Hornets up 15-8 after the first quarter. The lead was also seven at halftime as Loyd Star was up 28-21 at the break.

That margin hovered around nine for most of the third quarter before a strong offensive surge by the home team grew it to 49-28 at the end of the period.

Britt was able to sub in his younger players for most of the final eight minutes as McLaurin began to score off traps and turnovers and make the final score look closer than the game actually was.

“For the first time of us being in the gym together — with just one full practice under our belts — I thought we gelled pretty quickly,” said Britt. “We’ve still got plenty to improve on. We didn’t block out tonight and that led to too many second chance points, but I’m very happy with how the guys came together.”

Both Loyd Star teams travel to Rankin County tonight to play at Pisgah with the girls’ game beginning at 6 p.m.

Wallace goes off for 29 in LS opening night win

What’s old is new again at Loyd Star as the Lady Hornets kicked their season off with a more than... read more