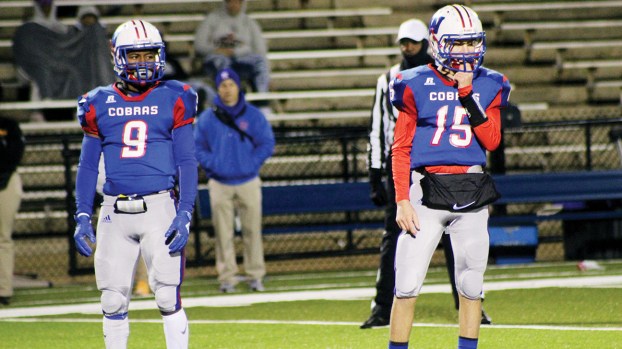 Photo by Cliff Furr Wesson is at home for a second straight week as they host Enterprise-Clarke tonight in an MHSAA 2A second round matchup. The Cobras are one of three area teams still alive in the football postseason.

A trio of remaining area teams in the postseason will hope to extend their season one more week with wins tonight in the MHSAA playoffs.

The Cobras (8-4) kept their season alive last week with a thrilling 20-14 double overtime win over North Forrest in the first round of the MHSAA 2A playoffs. In the first overtime both teams failed to score as Wesson was able to block a field goal that would have given NFHS the win.

Freshman quarterback Will Loy went 23-of-42 passing for 203 yards and one score in the win. Junior Orlando Smith picked up 37 tough yards on the ground and scored twice, including the game winner.

The Wesson linebackers were the difference in the game as senior Scott Hutt made 19 tackles including 12 solo stops. Sophomore Collin McGowan added 11 tackles and sophomore CJ Sutton added 10 stops.

Antrelle Sims picked off two passes despite battling a shoulder injury suffered early in the game. His second interception stopped North Forrest from scoring a go-ahead touchdown in the final minute of regulation. Wesson won despite committing five turnovers. Sophomore Gideon Forrest recovered a fumble for Wesson and junior Preston Lee was 2-of-2 on PAT kick attempts.

Enterprise has been one of the biggest surprises in 2A after going from 1-11 in 2018 to 10-1 this season. Freshman running back Kristian Milsap leads the Bulldogs with 1,230 yards and 19 scores. As a team Enterprise has scored 41 times via the ground this season.

Last week, North Forrest jumped up 14-7 on Wesson primarily due to Cobra turnovers and pressure from the defense applied to the Wesson passing game. Coach Loy says those two areas will be key again for his team.

“Defensively we’ve got to stop their run and on offense we’re going to have to handle their blitzes,” said Loy. “The turnover margin is going to be very important too. We need to hold onto the ball.”

Kickoff in Stone Stadium is set for 7 p.m.

Coach Jesse Anderson and his LC Cougars (7-5) face a familiar foe in the MHSAA 4A second round when they host Greene County (8-3) tonight in Monticello.

For the two previous seasons the schools were both members of Region 7-4A before the Cougars moved this year to Region 6.

Last week in their playoff opener, LC went to Mendenhall and dominated the homestanding Tigers 55-19.

Anderson says his team needs to use their run game to keep the Wildcat offense off the field.

“Time of possession is going to be huge,” said Anderson. “They’re hard to stop and we must limit their opportunities.”

Greene County started the season 0-3 with losses to 6A Biloxi, 6A George County and Alabama 5A Cintronelle. They’ve since run off eight straight wins including a 33-20 victory against Vancleave last week in their postseason opener.

Greene County and coach Michael King come in averaging 200 yards rushing and 100 yards passing per game. Three different Wildcats have run for over 500 yards on the season, led by senior Anthony Calhoun. Quarterback Drake Henderson is the lynchpin as he’s rushed for a team high 15 scores and also thrown for eight touchdowns against just two interceptions.

The GC defense is what the team thrives off. In their five region games they pitched a pair of shutouts, gave up just one touchdown in two other games and allowed a high of 13 points to Purvis in a 41-13 victory.

Last season, Greene County beat Lawrence County 41-20 in Monticello and in 2017 they won 46-20 in Leakesville.

Kickoff in Monticello is scheduled for 7 p.m. tonight.

The Panthers are headed to Pearl River County tonight to take on the Picayune Memorial High School Maroon Tide.

Last Friday in the final week of the regular season, Picayune (11-0) wrapped up their region title with a 49-28 win at Wayne County. The closest game of the season for the Marron Tide in 2019 was a 54-47 win over Gulfport (9-2) in week three. Since then PHS has been dominate.

The 28 points scored by Wayne County was the most given up by Picayune since the Gulfport game. They’ve scored 60 points or more four times this season including a streak of three straight games during their region schedule.

The Maroon Tide were state champs in 2011 and 2013 and are playing their final season under longtime leader Dodd Lee. Lee is retiring after this season — his 39th — at Picayune.

Picayune averages 435 rushing yards per game as senior Cameron Thomas has rushed for 2,542 yards and 34 touchdowns this season. The Picayune defense is giving up just 14 points per game.

And even though you know what you’re getting when you play Picayune, he said, it’s still a tall task to stop their running game.

“It’s a combination of their line and the quality of backs they have carrying the ball,” said Peavey.

BHS (5-6) ended their regular season last week with a 28-21 loss at Forest Hill. The defeat in a back-and-forth game snapped a four-game Ole Brook win streak.

Sophomore quarterback Dre Ross passed for 126 yards and one score. Senior Byrion Robinson carried the ball 16 times for 127 yards and one touchdown and Senior Jermario Hersey caught two passes for 50 yards and a TD.

The Panthers were harmed by a combined three turnovers including one deep inside FH territory.

The Panthers and Maroon Tide kick off at 7 p.m. tonight.

A running clock was used for much of the second half Tuesday as the Brookhaven Academy Lady Cougars routed the... read more