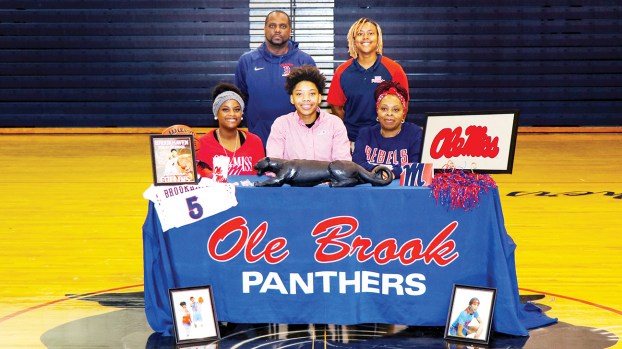 Brookhaven High senior Silentianna “Snudda” Collins values loyalty and feels deeply indebted to the important people in her life. Wednesday, Collins was surrounded by the people she cares about the most in Sinclair Gymnasium when she signed a letter-of-intent to play basketball next season at the University of Mississippi.

Last season as a junior Collins was a revelation for the Lady Panthers as she was named Daily Leader All-Area MVP after averaging 14.9 points, 3.9 rebounds, 3.7 assists, 2.7 steals and 1.2 blocks per game for a 27-2 Ole Brook team.

A 6-foot-1 guard that’s can score from every place on the court, Collins is a smooth operator with the ball in her hands.

It’s a long way from her early beginnings as a basketball player. She wasn’t the best player on her team when she was playing recreation department ball at Lipsey. The same for her time at Alexander. Collins knew she wanted to be good, but her early skills didn’t match her ambitions.

“You should have seen how bad my shot was when I was in junior high,” said Collins with a smile. “My handles were bad too, but I always loved the game. I heard when I was little that there was a league where women could play pro basketball and I said I want to do that one day when I was four years old.”

“Coach Wilson was willing to stay extra with me and help me develop my shot,” said Collins.

When Johns had her at Alexander Collins was going through a tough time in her life. She injured her wrist in junior high and also moved to Tupelo at one point before coming back to Brookhaven. She realized that the people she loved the most where in Brookhaven and she had the dream of playing basketball at the varsity level with the Brookhaven High Lady Panthers.

What Collins missed the most when she was away from Brookhaven is her grandmother, Phyllis Ellis. Ellis has raised Collins and the sacrifices of her grandmother are not lost on her.

“My grandmother works in the cafeteria at Brookhaven Elementary, she works at Walmart and in the concession stands for the Recreation Department,” said Collins. “She’s sacrificed to give me everything I’ve ever needed. I’m also very lucky to have my great-grandmother who’s always been there for me as well.”

Her nickname is one given to her by grandmother and Collins prefers it over her given name. Ole Miss has gone all in and used Snudda in press announcing her signing.

As a freshman at BHS Collins began playing both junior varsity and varsity for a team that finished 12-12. As a sophomore she led the team in scoring as the Lady Panthers upped their win total to 24 games.

Last season she had college coaches watching her at most BHS games as buzz about her skills began to grow.

In the spring and summer Collins played on the travel ball circuit for the Lady Conquerors. Larger programs would try and steal her away, but Collins was loyal to the Lady Conquerors and desired to stick with the program that had been there for her as she developed her skills.

“I would rather be part of something that’s becoming popular than join a team that’s already popular,” said Collins. “That’s how I feel about Ole Miss, too. I want to be part of the program that’s being built there.”

The signing class that Ole Miss coach Yolette McPhee-McCuin put together has been lauded as the best in the SEC and the ninth best class overall in the nation.

Ole Miss got a signature form Madison Scott, the 13th ranked player in the nation. There is a buzz and excitement around the program that Collins says you can feel.

“Coach Yo is building something special,” said Collins. “When I visited Oxford and hung out with the team I felt like they were people I had known my whole life. They’re a family and the coaches are parental figures to the team. You feel that love and I knew it was where I wanted to be.”

Collins could have played out her senior season and waited to see what other schools would come calling. There was a peace with choosing Ole Miss though and she gave them her verbal commitment this summer.

“When they called me and said, ‘we want to offer you a full scholarship to Ole Miss,’ I was speechless,” said Collins.

“I just sat there not saying anything back. Coach Wilson got on me afterwards and said I’ve got to be better at communicating,” she said with a laugh.

Wednesday, Collins let her pen do the talking as she fulfilled a dream that once felt far away by signing to be an SEC women’s basketball player.

A trio of remaining area teams in the postseason will hope to extend their season one more week with wins... read more