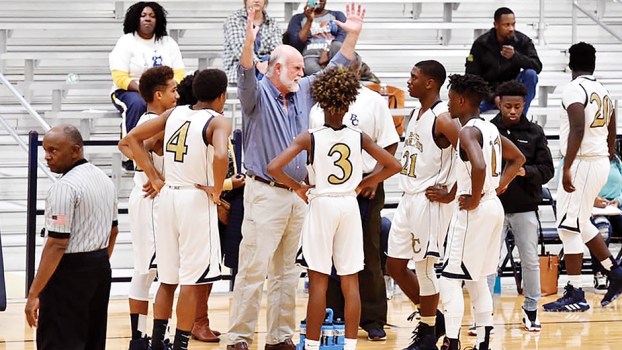 Photo by Stacy Leake Bogue Chitto coach Robbie Walters gives instructions to his team during their win over Raleigh last week. The Bobcats are back in action tonight at home hosting Salem. The girls’ game begins at 6 p.m.

Here’s a roundup of how area teams fared on Tuesday night along with a look at who’ll be in action Thursday night. All varsity action kicks off with girls’ games beginning at 6 p.m.

Tuesday night, Ole Brook split a pair of varsity games in the coliseum at South Pike. Coach Preston Wilson and his Lady Panthers moved their record to 5-1 with a close 35-32 win over the Lady Eagles. In the boys’ game, the Eagles took a 69-59 victory over BHS.

Expect a packed Sinclair Gymnasium Thursday night as BHS hosts two good Provine teams. The Lady Rams are 4-0 while their male counterparts are 4-1.

Simpson won a pair of close games when the two teams met in their gym Nov. 9. The Simpson boys beat BA 48-45 in a game where coach Josh Watts didn’t have his football players. The girls’ contest went to overtime that night with SA taking a close 68-66 win.

The schools are both members of the new MAIS 4A classification but are not in the same district.

Coach Robbie Walters and his Bobcats host Salem Thursday night in Bogue Chitto. The Lady Bobcats are 3-1 on the young season with their only loss coming to a powerful West Jones team.

Their last time out, the BC boys picked up their first win with a 59-27 trouncing of Raleigh. BC will also host Sacred Heart Saturday night.

With the football season finished, the Cobras finally are getting basketball season underway. On Tuesday, Franklin County took a pair of games from WAC.

In the boys’ game, Wesson went down 75-60 and the Franklin County girls won their contest 54-34. Thursday night, the Cobras welcome 4A Florence to the Snake Pit.

Coach Moochie Britt and his Lady Hornets improved to 5-1 with a 59-25 win at Raleigh Tuesday night. The lone defeat this season for LS was a 55-47 loss to Forest.

Coach Seth Britt and his boys team won 69-39 over Raleigh to bump their record to 4-2 Tuesday night. Loyd Star will travel to Meadville Thursday night to meet Franklin County. It’ll be the final game for the Hornets until they begin play at the Lincoln County Tournament on Dec. 3 at West Lincoln.

The Jackets and coach Shane Adams are off Thursday night but go back to the Pine Belt for a second time this week on Friday when they play Sacred Heart in Hattiesburg.

Tuesday night, Enterprise was swept at Purvis by the Tornadoes. Purvis won the girls’ game 50-17 and took the boys’ contest 51-20.

The Bears are also slated to play Friday as they travel to take on 4A North Pike in Summit. The WL boys are 2-1 with a blowout win over Puckett, a close victory at Lawrence County and a close home loss to 6A Germantown.

The young Lady Bears (0-3) are still looking for their first win when they face North Pike.

Like Loyd Star and Enterprise, West Lincoln will be off next week for Thanksgiving before returning to the court at the Lincoln County Tournament on Dec. 3.